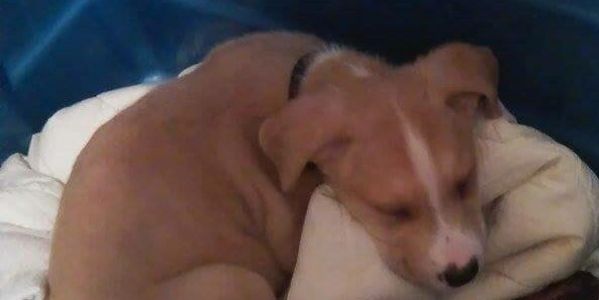 Ralph Brown is facing charges for allegedly killing a four-month-old pit bull/terrier mix puppy. He waived his hearing on 2/10/16 at Magisterial District Court in Clearfield, PA.

A Clearfield, PA man has been accused of causing injuries, which killed a young dog, while he was intoxicated, according to court paperwork and reports to police.

Ralph Thomas Brown III, 29, of Clearfield has been charged by Clearfield Borough police with animal cruelty, disorderly conduct, loitering and prowling at nighttime and public drunkenness. His bail has been set at $25,000.

According to the affidavit of probable cause, at 5:14 a.m. Feb. 2, Clearfield County 911 dispatched borough police officers to a report about a deceased dog in a box behind a North Fifth Street residence. The caller alleged that it had been there overnight after being kicked to death by an African-American male.

Police made contact with the owner and asked what happened to her deceased dog. She told police Brown had been at her residence at approximately 8 p.m. Feb. 1, and while he was intoxicated, he made statements about “he didn’t like the dog and he wanted to kill something.”

The dog’s owner told police she left the residence for a short time to go to Sheetz. When she returned she asked Brown where her dog was at, and he told her it was outside “but don’t walk down the alley, you’ll find something.” Brown eventually led her to the dog, which was in a small playhouse to the rear of a North Fifth Street residence.

She told police the dog was alive but had blood coming from its mouth and nose. She took it back to her residence, where it died a short time later. She said it was cleaned and placed outside until it was taken to a veterinary office to see if it could be determined what happened to the dog. She told police she then asked Brown to leave her residence, which he did.

Another female who was at the residence said she was in another room when Brown had apparently gone outside with the dog. However, she confirmed that Brown was highly intoxicated and made comments about not liking the dog and wanting to "kill something."

On Feb. 2 borough police transported the deceased dog from the station to the Allegheny Spay & Neuter Clinic. It was an approximately four-month-old pit bull/terrier mix puppy. According to the veterinary report, there was a laceration on the left jaw, red marks and bruising around the throat, a bruise on the inside of the left, rear leg, two minor scratches on the abdomen and one on the tail and blood coming from the mouth and nose.

The report also indicated that the deceased dog’s abdominal cavity was filled with blood. There were multiple lacerations to the liver, the lungs were hemorrhaged and there was blood in the thoracic cavity. It concluded that the cause of death was "severe blunt force trauma, which made the dog bleed to death."

During an interview with police, Brown allegedly stated he was drinking vodka heavy and intoxicated. He allegedly recalled choking the dog with his hands and putting it inside the playhouse.

Please sign for full max sentence. This man stated he wanted to KILL and he did!!! Let's use those FBI laws!

We are asking that Mr. Brown receive the fullest penalty possible for his crime that he committed in torturing and killing this innocent animal. He was well aware of the crime he was about to committ, as he announced it to others, according to statements he has made to police, and he followed through with his acts.

Because these innocent creatures, animals, have no voice, we, as humans, must speak for them. The violence must stop here. We are all well aware that if it does not stop here it may well go further an more "innocent" lives may be harmed, even far beyond animals.

We thank you for listening to us as we deliver this petition to you on behalf of this puppy's life.

Stacy LoCastro and all signed below.