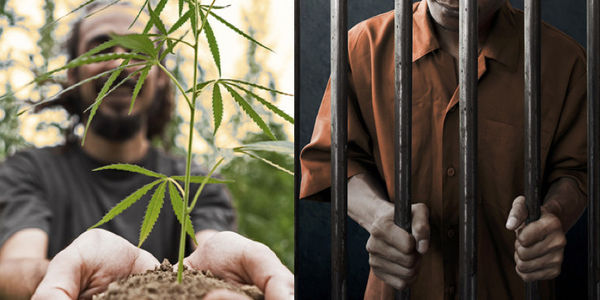 Weed might be legal, but people are still wasting away in jail on marijuana charges

Weed, weed, the magical plant. The more you smoke, the more you can't... stand for the U.S.'s system of mass-imprisoning people based on simply using or distributing an all-natural, herbal coping aid.

This intentional "War on Drugs" disproportionately victimizes Black and Brown folks. Even though ample studies show that white folks use marijuana at the same rights as their BIPOC peers, their arrest and criminalization rates for weed are microscopic by comparison. For example, in New York City just last year, upwards of 94% of all people whom police arrested on marijuana-related charges were people of color. Even though weed use levels are similar for whites.

Luckily, in 17 U.S. states as well as the capital city of Washington, D.C., marijuana is now legal. Not just for people with specialty medical cards. For everyone. But many individuals who were put behind bars for these substance-related "offenses" in the past still languish there anyway.

Sign the petition to each and every U.S. state that's legalized recreational marijuana use, demanding they wipe all cannabis infractions!

Marijuana has been used to treat all manner of conditions, from PTSD and racism-related complex trauma, to anxiety and depression, to chronic pain, to multiple sclerosis, seizures, and cancer. It should have been hailed as a "miracle drug" for a long time, but instead, state and federal governments have spent upwards of 50 years using it as an excuse to imprison nonviolent individuals.

Why should someone still be imprisoned for association with something that's no longer a crime? This would be like keeping beer-drinkers and bartenders locked up even after the Prohibition Era in the 1920s (which banned people from drinking, selling, or producing alcohol) was brought to an end.

And even as traumatic as imprisonment is — after all, it's defined as being ripped from one's community, stripped of many basic rights including freedom, and placed under animalistic lock-and-key conditions — the damage doesn't end there. After being released from incarceration, having a criminal record — even a non-violent, substance use-based record — can bar a person from participating in normal life for decades to come.

People who have been convicted even of misdemeanor marijuana charges (such as being in the same car as the tiny end of a leftover blunt) face hurdles landing jobs, finding housing, getting approved for loans, and more. One man described for CBS News how a single day smoking weed with his brother cost him his job, his license to operate tow-trucks, his home, and ultimately forced him, his wife, and his children into a homeless shelter for three years.

Fortunately, when New York's state legislature legalized all marijuana in March 2021, lawmakers also passed a provision that automatically expunges people's records of all marijuana-related convictions. This is huge! Once records are expunged, it gives individuals the chance to finally live their lives again.

Care2
Weed might be legal, but people are still wasting away in jail on marijuana charges
COMPARTIRTWEET