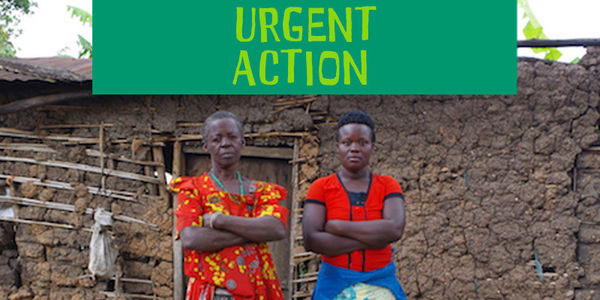 Almost eighteen years after the evictees were expelled from their lands, the court has finally ordered a mediation. Although on July 1, 2019, the responsible judge ordered the mediation process to be completed by August 28, 2019, this process is still ongoing.

We urge you to support the evictees' demands for the full restitution of their land and compensation for all harms and losses caused.

In August 2001 the inhabitants of four villages in the Mubende District in Uganda were forcefully evicted by the Ugandan army.

The Uganda Investment Authority (UIA) leased the land to Kaweri Coffee Plantation Ltd., a 100% subsidiary of the German Neumann Kaffee Gruppe (NKG). The houses, churches, crops, and medical clinic of the approx. 4,000 peasants were destroyed.

Despite having their lives wrecked, the community have fought for 18 years in court. Until now, no one has been compensated in any way.

Nonetheless, there is a small window of opportunity to end the suffering of the evictees through mediation.

This means that the conflict could be solved if the Government of Uganda and the NKG allow it.

The petition will be handed over to President Museveni from Uganda, and Mr. Christian Neumann.

Give them back their land!

If you want to know more about the case visit the following links: