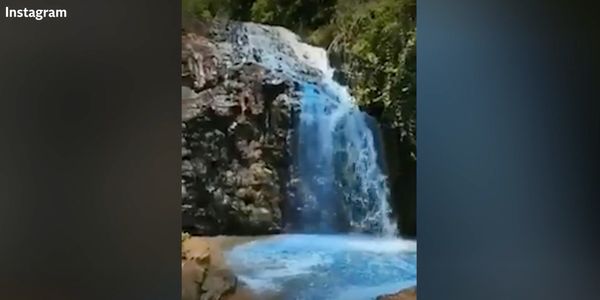 Yet Another Gender Reveal Party Caused Massive Damage To The Environment.

For some reason, people are still doing gender reveal parties in the year of 2022. And even though researchers, doctors, and psychologists agree that an unborn child's biological sex doesn't have any relationship to their chosen gender identity and presentation, people keep hosting gatherings where they obnoxiously shoot blue or pink balloons into the air. But a recent gender reveal party led by a couple in Brazil was uniquely devastating, and could have possibly caused an environmental catastrophe.

Sign now to demand the Secretary of State for the Environment hold this couple responsible and charge them with environmental damages!

The Brazilian couple in question thought it would be a good idea to release blue dye into a waterfall along the Queima Pé river to announce the gender of their baby (which, to be clear, is impossible for them to know, since gender and biological sex are unrelated). As if changing the color of an entire river wasn't enough, the couple also set off blue-colored smoke bombs. It is unclear what the ecological consequences will be, but one thing is for sure: environmental authorities must make sure a stunt like this is never attempted again.

Unfortunately, this is not the first incident of a gender reveal party gone wrong that creates an environmental catastrophe. In California last year, a couple literally started a wildfire that destroyed more than 7,000 acres of forest thanks to a firework at a gender reveal party. Clearly, the people who engage in these outdated stunts must be held accountable!

It is beyond comprehension that a couple possibly caused massive damaged an entire ecosystem in the name of revealing a not-yet-born baby's sex. We must put pressure on the Secretary of State for the Environment (Sema-MT) in Mato Grosso to charge this couple with environmental damages and hold them responsible for this destructive, irresponsible behavior! Sign now if you agree!

Care2
Yet Another Gender Reveal Party Caused Massive Damage To The Environment.
COMPARTIRTWEET