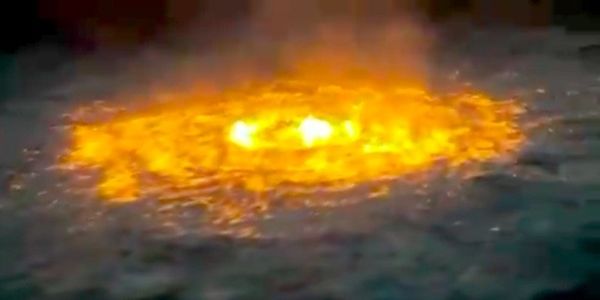 This oil corporation set the ocean on fire with leaked gas, but it's still operating in the Gulf of Mexico

An underwater pipeline in the Gulf of Mexico has leaked yet again, this time causing a huge fire that erupted right on the surface of the ocean. Orange flames shot up from the depths of the waters, echoing out in a bubbling ring like a pool of volcanic lava.

Described as an "eye of fire," the fossil fuel fire raged for around 5 hours before firefighting crews were able to extinguish it. Yet some officials in charge are still claiming this catastrophe was not related to "any spill."

Sign the petition to demand that the governments of Mexico and the U.S. refuse any and all permits for new oil drilling in the Gulf of Mexico, and to revoke Pemex's license to drill!

Pemex is a state-owned petroleum company in Mexico, and it owns the offshore drilling rig located near the site of the fire. Just before the inferno burst into full blaze, Pemex's rig reported a gas leak. In fact, earlier in the day, leaked internal reports show that officials knew important components of their machinery had been compromised by a heavy rain storm and lightning.

Now, the corporation is claiming it will supposedly do a full investigation — but we know where that always leads with oil and gas companies. No where. We have been down this fossil fuel-ringed road time and again, and there's one thing that always remains clear: oil corporations' main priority is to protect their bottom dollar, and to hell with everything else.

What's less clear is what will happen to ensure any harmed wildlife or ecosystems are repaired and conserved. We aren't trying to wait until Pemex's pipelines explode into a full-blown ExxonMobil-style situation, coating the entire Gulf with toxic, choking chemicals. If a situation like this were to happen, it would be devastating. Pemex facilities in the area near this particular oil rig produce more than 680,000 barrels of oil every single day. Even a fraction of that spewing out into the ocean would be deadly.

Pemex's damaged equipment caused a gas leak and giant fire eruption. They don't deserve any second chances. Because the next chance could lead to far worse consequences.

Care2
This oil corporation set the ocean on fire with leaked gas, but it's still operating in the Gulf of Mexico
COMPARTIRTWEET