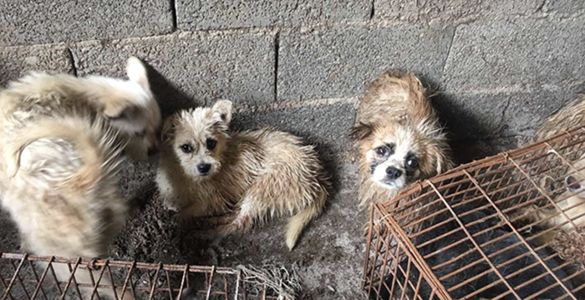 The world has applauded the cities of Shenzhen and Zhuhai for being the first in mainland China to ban the consumption of dog and cat meat and welcomed the Chinese government's confirmation that dogs are companions not livestock. However, millions of stolen pets and stray dogs in China continue to suffer terrible abuse for this trade and are killed in horrific ways.

The brutality of the dog and cat meat trades tarnishes China's global image and reputation, and opinion polls show that most people in Yulin and across China don't eat dogs and cats. Large public gatherings for the Yulin festival also runs contrary to public health and safety in the wake of COVID-19. We implore China to end dog and cat meat trade horrors like the annual Yulin festival.

Dear Lu Xinshe, In light of the progressive example of Shenzhen and Zhuhai cities in banning dog and cat meat consumption, and in compliance with the Ministry of Agriculture's recent declaration that dogs are companions not livestock and to safeguard the health and safety of Chinese citizens in the wake of the COVID-19 pandemic, we respectfully urge you to end the mass slaughter and consumption of dogs and cats in the Guangxi Zhuang Autonomous Region.

A growing number of people in China care deeply about the welfare and safety of their pet dogs and cats. The booming pet care industry is good for the local economy, animal welfare and China's global reputation.

Every year across China, millions of dogs and cats — many of them stolen pets — are snatched, smuggled and brutally slaughtered for their meat. These animals suffer enormously — packed tightly together in tiny cages and driven for days without food or water on long journeys across the country, only to be beaten to death in front of each other. Several thousand dogs and cats will be killed for the Yulin festival alone in a public display that runs contrary to the Chinese government's clear statement in April 2020 that "with the progress of human civilization and the public's concern and preference for animal protection", dogs are not considered livestock.

In addition to the serious animal welfare issues, the mass transport and consumption of dogs also threatens public health and safety by potentially spreading rabies and undermining China's efforts to control this horrifying disease. The World Health Organization has acknowledged the risk to public health posed by the dog meat trade. Furthermore, in the wake of the COVID-19 pandemic that likely started at a market in Wuhan, permitting a large public gathering such as the Yulin festival risks the health of the public and undermines China's public safety efforts.

I stand in solidarity with the millions of people in China, across Asia, and around the world who want to see China take a leading role in ending this brutality.