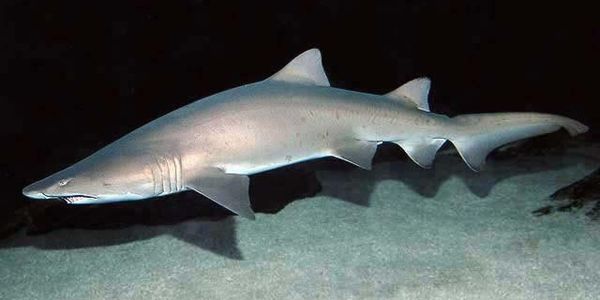 I am writing to you this day as an appeal on behalf of a well-known and iconic species of animal found within New York state which is in great danger of becoming extinct within the next few years. The species which concerns me is the Sand Tiger Shark (Carcharias taurus), which is also known by the names of the "Ragged Tooth Shark" in South Africa and the "Grey Nurse Shark" in Australia. The Sand Tiger is found along the Atlantic seaboard of the United States in marine waters stretching from Massachusetts to Florida. For years, it has been known that populations of this shark are found within New York territorial waters, and in fact, this shark is one of a small handful of sharks which are native to the waterways of New York Harbor and the Long Island Sound.

The Sand Tiger Shark typically grows to 10 feet long and reaches about 125 pounds in weight. The Sand Tiger is unique among sharks that it is the only shark species which has the ability to gulp air in order to provide buoyancy, which enables it to hover almost motionless. Sand Tigers are also able to tolerate water which has low oxygen levels, which other shark species would not be able to survive in. Despite its menacing toothy appearance, it feeds exclusively on fish, and prefers to hunt for fish closer to the sea bottom rather than near the surface. Divers who have encountered these animals in the wild assert that Sand Tigers are shy and reclusive by nature, avoiding humans as much as possible, and will only attack if they are harassed or harmed. In fact, according to the international database of shark attacks known as the S.A.S., there are absolutely NO records whatsoever of a human being killed by a Sand Tiger at any time, anywhere in the world, ever.

Sand Tiger Sharks adapt very well to captivity, and it's for this reason that the Sand Tiger is the shark which is most commonly seen in public aquariums. These sharks are a great attraction to the public, many of whom come to these aquariums specifically for the purpose of seeing sharks like this up-close. Sand Tigers are therefore not only biologically important, but they are also financially important, as the attraction and draw for these animals is the reason for a large portion of these aquariums' revenue. Without Sand Tigers to draw in the public, the amount of money that these institutions take in every month would be dramatically lower.

However, Sand Tigers are not invincible. While Sand Tigers are slightly more tolerant of pollution than other shark species, the levels of pollution within New York Harbor and the Long Island Sound have become so high that even Sand Tigers find it extremely difficult to survive here. Populations have dramatically decreased, and if the present trends of population decline continue, they are unlikely to rise again. This is because the Sand Tiger has a very slow birth rate. Typically, females give birth to new sharks only once every two or three years, and the number of sharks that are born within each gestation period is very low. This means that if a population of Sand Tigers is hard-hit, it may possibly take centuries for it to recover.