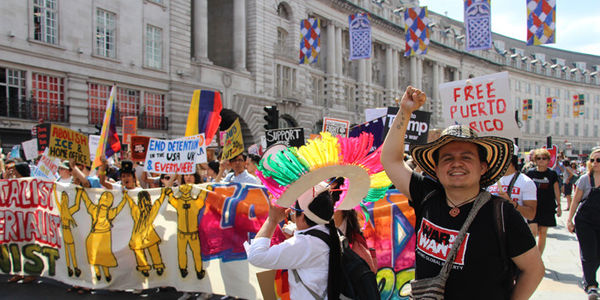 The rise of the far right: help fight back

In February 2017, just weeks after Donald Trump's inauguration, UK Prime Minister Theresa May offered to roll out the red carpet for an official State visit for President Trump, despite his horrifying record of racist comments, the allegations of sexual violence, his denial of climate change and his promise to roll back human rights.

Since then, here in the UK, we've seen the resurgence of fascism on our streets, and a populist 'Free Tommy Robinson' campaign bankrolled by an extreme right-wing American foundation. We've seen mainstream media outlets providing uncritical platforms for the extreme right, and seen the explicit support of white supremacists in the Trump administration for a new European wide movement of the far-right.

Hate crime in the UK has skyrocketed in just a few years. Islamophobic attacks, already at unprecedented levels, increased 26 percent last year alone and predominantly target Muslim women. Targeted attacks on LGBTQ+ people are up 80 percent. And in a recent poll 24% of the British public said they would vote for an extreme right wing, anti-Muslim and anti-migrant party.

We must urgently fight back against these extreme ideals, both at home and globally.

Last year after Theresa May's invite, we pledged to work with human rights and women's groups, migrant and refugee organisations, and trade unions in one of the biggest rejections of hatred and bigotry: the Stop Trump Coalition.  Together this summer, we mobilised a quarter of a million people to stand up against Trumpism: an ideologue that sacrifices the poorest and most vulnerable to the interests of rich elites.

Mobilising a quarter of a million people against Trumpism was a great achievement. But by itself, this is not enough. Now we must take the next step: to recognise, resist and offset corporate agendas and the rise of the far-right. We must rebuild a movement for justice: one that recognises that the antidote to the poison of the far right is to tackle racism, inequality, and injustice, at home and globally. Sign up with War on Want and join the fight.

Care2
The rise of the far right: help fight back
COMPARTIRTWEET