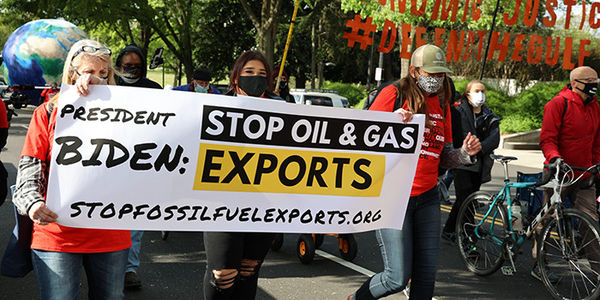 Within the next decade, nearly a dozen oil and gas export projects are proposed to be built along the Gulf Coast. If built, these projects will lock us into an irreversible climate crisis and release unacceptable levels of toxic air pollution on already overburdened communities in Texas and Louisiana — all for global export and corporate profit.

The Department of Transportation is currently considering five proposed deepwater ports for oil and gas exports that would collectively carry up to 7 million barrels of oil each day through sensitive and sacred waters in the Gulf of Mexico. Louisiana and Texas have an exceptionally high number of leak incidents per mile of pipelines, and the latest data warns that with any new proposed pipeline or infrastructure, these rates will increase with the rising sea.

Communities along the Gulf Coast — where nearly half of the nation's existing oil and gas refining capacity currently exists — already suffer extreme health impacts from air and water pollution such as increased rates of cancer, asthma, and preterm birth. New and existing communities near fracking wells, pipeline routes, refineries, and export terminals will endure acute, significant impacts of added pollution, and then take a double hit when climate disasters strike.

In order to prevent impending climate collapse, the Department of Transportation must stop the extraction of oil and gas from oil fields like the Permian Basin destined for overseas markets.

Thankfully, allies across the country are fighting back. Just last month more than 44,000 individuals voiced opposition to a crude oil facility that would build two massive pipelines straight through Surfside, Texas, threatening local drinking water supplies. A federal court in January ruled that the Department of the Interior grossly underestimated the impacts to climate and risks to Gulf Coast communities before deciding to hold the largest oil and gas lease sale in U.S. history.

The Biden Administration must prioritize the health and wellbeing of our Gulf Coast communities above the interests of the fossil fuel industry. Stand for climate action and environmental justice today by urging the Department of Transportation to act immediately and deny any new offshore export terminals.
leer la carta de la petición ▾
Dear Secretary Buttigeig:

We the undersigned urge you to stand with communities and deny any new offshore export terminals on the Gulf Coast.

When taking office, you have repeatedly said "every transportation is a climate decision" and pledged to prioritize environmental justice and equity in DOT's decision making. In the coming months, your agency will have the power to decide whether or not to grant deepwater port licenses to new oil and gas export terminals, decisions that will have profound health and climate impacts in our historically marginalized Gulf Coast communities.

Now is the time to fulfill your promises to protect communities and the climate.

The majority of oil and gas extracted from the Permian Basin of New Mexico and Texas, and other regions is exported to Asian and European markets. While fossil fuel companies are getting rich, frontline communities from the Permian to the Texas Gulf Coast suffer extreme health impacts from air and water pollution, such as increased rates of cancer, asthma, and preterm birth. In order to prevent immediate, global climate collapse, we must stop the extraction of oil and gas from oil fields like the Permian Basin destined for overseas markets.

The Transportation Department must act now and prioritize the health and wellbeing of our planet above the interests of the fossil fuel industry. Deny the deepwater port licenses for Blue Marlin Oil Export Facility, Bluewater, Texas GulfLink, Sea Port Oil Terminal (SPOT) and the West Delta LNG, and stop the expansion of crude oil exports.