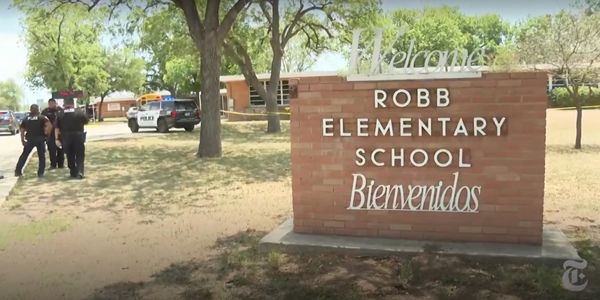 At Least 19 Children and 2 Adults Have Been Killed in a Mass Shooting at a Texas Elementary School. The Nation’s Lawmakers Have Blood on Their Hands.

On the afternoon of Tuesday, May 24th, a shooting was reported in Uvalde, Texas at a school filled with kindergarteners through fourth graders. An active shooter, who authorities believe had a handgun and a rifle -- although that is yet to be confirmed -- entered the school and opened fire on children and their teachers.

So far, Texas Governor Greg Abbott has reported that 19 children, 1 teacher and the suspected shooter are dead. So far, several other children were confirmed injured but the number is unclear.

In his statement, Governor Abbott claimed that "the state of Texas is in mourning" with the families of the children who were killed. But Governor Abbott has been an active participant in creating a national landscape that prioritizes firearms over lives, guns over families, and death over life. Just last year, Abbott signed a firearm law that essentially eliminated most of Texas' restrictions on carrying handguns. Even worse – in just a few days, Abbott and other Republicans are scheduled to speak at the upcoming National Rifle Association meeting in Houston.

This is the 27th school shooting in the United States this year.

The U.S. is in a nightmare of a pattern: year after year, mass shootings happen – at schools, places of worship, grocery stores. Then, the call for stricter gun control laws is taken up. But ultimately, our lawmakers miserably fail to join together in bipartisan efforts to protect us. And the whole horrific cycle starts over again.

Guns literally outnumber people in the United States. We are the country with the highest rate of civilian gun ownership in the world. We are also a country that has seen 198 mass shootings this year alone – just about 20 weeks into 2022.

The students of Robb Elementary School were looking forward to starting their summer break this week. Instead, the Uvalde community is now facing a horrifically tragic event that changed their lives forever. There is no excuse whatsoever for our elected officials to keep dragging their feet on gun control while people are constantly dying – many of them children.

Sign the petition and demand that this tragedy be the last in the cycle of shameful inaction. President Biden and Congress: pass comprehensive, strong gun control legislation NOW!

**GoFundMe has designated a place for people to donate to verified fundraisers for families affected by the shooting. You can find more resources for ways to help here.

Care2
At Least 19 Children and 2 Adults Have Been Killed in a Mass Shooting at a Texas Elementary School. The Nation’s Lawmakers Have Blood on Their Hands.
COMPARTIRTWEET