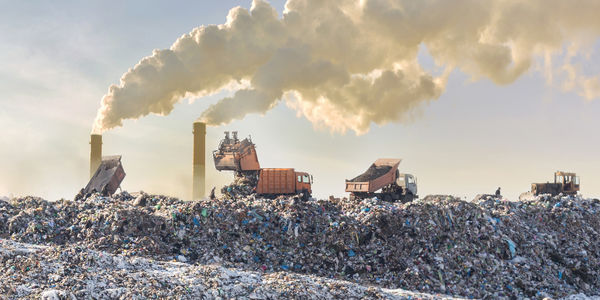 Canada is heading down a path that is filling our oceans with plastic pollution; a path focused on false solutions, with no clear alternatives to the plastic disaster.

The problem? Burning plastic as a hazardous form of recycling.

The Canadian government cannot continue to allow burning plastic waste as recycling. It has wasted millions of dollars investing in plastic waste incineration facilities and has seen no return on investment.

We need real solutions for the oceans, not more pollution. This means investing in refill and reuse systems to reduce our plastic waste right at the source, keeping plastic out of the oceans, incinerators and landfill.

Together we must ensure our government creates and implements systems that clean, refill and reuse the same packaging over and over – like the milk jug model of decades past. This is the only long-term solution to achieving zero plastic waste and ending toxic cycles of plastic waste "management." In fact, studies show that by increasing refillable alternatives by 50 per cent, we could see a reduction of plastic pollution in the ocean by up to 83 per cent. To change the path Canada is on, the government must rethink our current system and work toward zero plastic waste.

I support the federal government's commitment to achieve zero plastic waste in Canada by 2030. The recent single-use plastic ban was a good step toward this goal, but there is still much work to be done.

Burning plastic waste releases harmful cancer-causing emissions into the air, water and soil. This process is sometimes called "advanced recycling," but it is essentially pollution and cannot be considered an acceptable form of recycling.

Canada produces more than two million tonnes of plastic packaging waste annually. Refillable and reusable packaging alternatives are the only long-term solution to achieving zero plastic waste. National refill and reuse systems operate in more than 40 regions globally and Canada is falling behind. This is what Canadians want.

When given the choice at no extra cost, 86 per cent of Canadians would prefer to use a refillable/reusable drink bottle over a single-use plastic option. The Minister of Environment's mandate letter stated a $100 million fund would be established for innovations in achieving zero plastic waste; this fund should be established in the 2023-4 budget and be devoted to refill and reuse, scaling up the small businesses across Canada trying to fill this gap in the market.

That is why I am standing with Oceana Canada and asking you to take the following actions to reduce plastic pollution: Ban burning plastic waste Invest in refillable and reusable packaging solutions By requiring these actions, you can position Canada as a global leader and demonstrate that it is possible to achieve zero plastic waste.