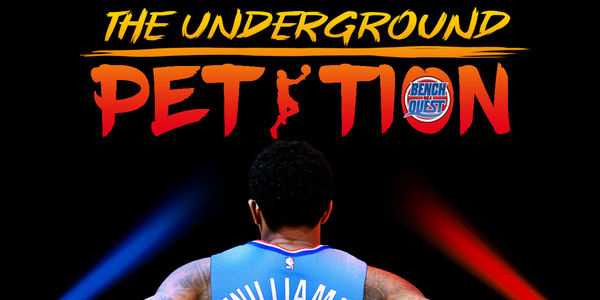 Dear Clippers Front Office,
This honest cause is born out of respect and admiration for legendary Clippers player Lou Williams. His career with the L.A. Clippers ended abruptly. We at The BENCH ON A QUEST Movement firmly believe that The Underground G.O.A.T. deserves a MUCH better treatment!

- 1.) a STATUE of Lou Williams in front of the new CLIPPERS arena;

- 2.) the Clippers to give Lou Will either a 10-day contract, or worst-case scenario: a 1-Day contract, so that he can retire as a Clipper!

- 3.) And of course, the Main Goal of this cause is the Clippers to honor Lou Williams by retiring his jersey number 23 in the rafters of the Clippers new arena in Inglewood!

Here we highlight the main reasons why we believe in The UNDERGROUND PETITION:

The Underground G.O.A.T. scored nearly 5,000 𝐏𝐨𝐢𝐧𝐭𝐬 🏀 in less than four seasons off the bench for the Clippers. That accounts for 33% of his total 16-year career points scored... in just 4 years!! (That's how much he elevated his game with the Clippers.)
It's easy to overlook his 𝟏𝟗.𝟏 𝐏𝐨𝐢𝐧𝐭𝐬 𝐏𝐞𝐫 𝐆𝐚𝐦𝐞 and 𝟓.𝟏 𝐀𝐬𝐬𝐢𝐬𝐭𝐬 𝐏𝐞𝐫 𝐆𝐚𝐦𝐞, but we should NEVER FORGET that it was Lou Williams who eased the pain after we lost CP3. Without Lou Will there'd be no Kawhi, nor PG13! We should Never Ever Forget what "Sweet Lou" did for the Clippers organization!!
Lou Williams has been a super-sub throughout his career! And he 𝐁𝐞𝐜𝐚𝐦𝐞 𝐭𝐡𝐞 𝐥𝐞𝐚𝐝𝐢𝐧𝐠 𝐁𝐞𝐧𝐜𝐡 𝐒𝐜𝐨𝐫𝐞𝐫 𝐢𝐧 𝐍𝐁𝐀 𝐡𝐢𝐬𝐭𝐨𝐫𝐲 with none other than the L.A. Clippers!
🏆• In L.A. he won 𝟐 of his three 𝐒𝐢𝐱𝐭𝐡 𝐌𝐚𝐧 𝐨𝐟 𝐭𝐡𝐞 𝐘𝐞𝐚𝐫 𝐭𝐫𝐨𝐩𝐡𝐢𝐞𝐬!!
✴️• Lou Williams had 𝟐𝟐𝟒 career steals 𝐟𝐨𝐫 𝐭𝐡𝐞 𝐂𝐥𝐢𝐩𝐩𝐞𝐫𝐬!
✳️• With a Winning Record of 𝟏𝟓𝟗 𝐨𝐟 the 𝟐𝟔𝟏 𝐠𝐚𝐦𝐞𝐬 that he 𝐩laye𝐝 for the Clippers - that earned him the 𝟏𝟔𝐭𝐡 position 𝐨𝐧 𝐭𝐡𝐞 LA Clippers 𝐅𝐫𝐚𝐧𝐜𝐡𝐢𝐬𝐞 𝐥eaderboard (𝐟𝐨𝐫 𝐌𝐎𝐒𝐓 𝐖𝐈𝐍𝐒)! 🔥
Lou is arguably the GREATEST 6th man ever... Lou represented much more than that as a Clipper! He is a LEADER and a MENTOR. Lou Williams is one of the most important clippers of all time!
For all those reasons we BELIEVE that the Clippers should give Lou Will either a 10-day contract, or worst-case scenario: a 1-Day contract, so that he can retire as a Clipper!
And of course, the Main Goal of this cause is to honor Lou Williams by retiring his jersey number 23 in the rafters of the Clippers new arena in Inglewood! Right where it belongs!!

This petition is directed towards Lawrence Frank, Clippers Vice President of Basketball Operations, and towards Steve Ballmer, L.A. Clippers Owner.
P.S.
Apart from taking part in the petition, also do something more – if you feel strongly enough about this issue, feel free to use more traditional means: write a letter to the Clipper Front Office, and mail it! Make a phone call, if that's your desire. If you actually take the time to do these things, it's clearly an important issue to you, and you're more likely to be heard.
Thank you, Clipper Nation!! LET'S GO!!