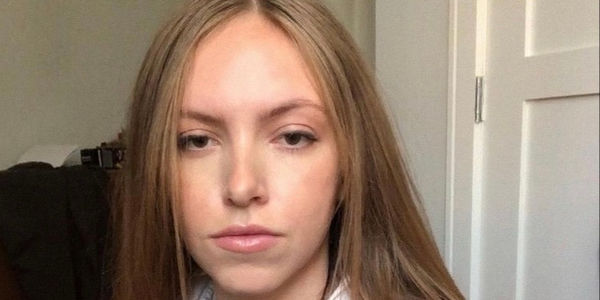 This is a calling to ban Thief Stalker Emily Robertson from all social media and Ecommerce platforms on which she conducts her stalking and thefting acts; as well as ban her from social media jobs or provide such duties to third parties due to her serious misusage of social media to conduct her years of violating behaviors that show no signs of slowing down upon warnings: hyper intensive harassment, stalking, monitoring, thefting, intruding privacy, data breach, mental disturbance and abuse.

Emily Robertson has around 10 major career paths she took on through maniacally stalking, monitoring and stealing from the same victim for years. She has demonstrated strong mental illness signs with no shame, remorse, guilt and conscience.

Any of her career path as direct results of these thefting shall also be put to sleep as it is her major motives in stalking, monitoring and disturbing the victim. Only PR and blogging are her original careers. Digital, strategist, modeling, digital arts/illustrations, Tiktok content creation and more are direct results of thefting over the years, shockingly from the same victim.

It is also time for stalking organizations and the law to start recognizing such type of stalking as social media is an even more popular and important channel among the young generations.

Over the course of the past 5 years, Emily Robertson has intensely and maniacally monitored, tracked and stolen from one single victim on a daily to 24/7 basis. The victim gave up established identities, changed multiple websites and two dozens of social media accounts in an effort to restore peace after years of disturbance. Emily Robertson has always managed to intensely micro-search to find the victim and continue her self benefiting stalking and thefting at the severe disturbance of others.

Social media is more of a means used by her for self benefits at the extreme and long term costs of others well beings. Despite repetitive, serious warnings and an ultimatum, Emily Robertson has callously showed no remorse, conscience and guilt in stopping her greedy, sinful acts. She walked around flaunting from in and out, looks to words and careers what she stole with no shame. All the maniac stalking and disturbance is solely for her self-benefits at the greater costs of others: to copy and steal from the victim.

Knowing a campaign is going on against her and she is getting exposed, Emily Robertson continued the intrusion and disturbance through stalking and thefting. It is truly no shame at its epitome. The victim let her steal at least 5 major things among tons of others and chose to give up established identities just to get away from her, that is not enough for her and she apparently wanted life long disturbance and intrusions.

Now she won't be allowed to keep any of the things she stole over the years, in (careers) and out (looks). Where she comes from, is where she has to go back.

There are several occasions she has shown her "drive and goals", which itself is a type of thefting from the victim. It turns out all these higher purposes are in essence the lowest remarks of her as a "human being" as her only drive and goals are carried out through copying and thefting! She will literally copy any- and everything major or minor, from careers, ideas to looks and words. It is truly despicable and disgusting. 2021 marks the summit of her stalking and thefting. She is truly an action taker, by action – it is simply copying and thefting. ​

For the unfortunate victim, it is years of mental disturbance, harassment and lack of peace, deprived freedom; not a day passed by without feeling being watched constantly with no privacy, distress and annoyance. As such Emily Robertson's sinful acts will no longer be tolerated and must come to an end.

No Shame is not a character issue, but rather a mental illness issue. Typically, those without a sense of shame are narcissistic, amoral, psychopathic personalities that has no guilt, remorse and conscience. Saying that they "just don't care" is an understatement. They are well beyond caring and at the point of self-actualization regardless of the costs to other people.

No wonder psychologist has called her an exploiting predator certain with mental issues and the case is serious.


Section I. Psychologist on Emily Robertson's Behaviors being Serious with Mental Issues

Maybe the mediocre-ness u describe suggests intellectual impairment which may contribute to copying behaviour.

Some people have no empathy - dont understand how their behaviour may hurt others. I'm sorry this happening. If your copy thief has been bothering people such as u for so long-it does seem treatment is indicated.

Psychologist Question: What sort of things does she copy from you?

how many times has this happened to you?

How many years has it been happening for?

how many times did u have to change your identify?

The amount of times she has copied you

- Major career paths at least 7 times. Small things tons of time, eg she will tend to post on social media after the victim always

What kind of things she copies

- Her career, copy the victim's words and post on social media after the victim. Now she is also polishing up her looks, her photo quality, her goals and drives etc. per "motivation" from the victim. It is like major make over for her through stalking and thefting.

The amount of times u have had to change your identity

- Several websites in 2 years (two changes in six months) and two dozens of social media accounts changes to avoid getting found and many things else.

"She sounds like a real 'copy cat?" She copies your looks, comments, many words - and has boasted about careers she took from you?

That sounds fairly serious - and awful for u

So sorry to hear about these details :("

Not just a career, many careers She boasted as if she is the originator of all. Any small things I post she will use that as a way to upgrade herself and pick up something from it

Thanks for the extra information - especially that u have noticed that this person copies 'every little thing' you say or do.

if this person is copying 'everything u do' since 2017, and you've had to change several websites past 2 years, and numerous social media handlers - this strongly suggests mental health problems.

The research said there are 5 types of stalkers: rejected, intimacy seeking, incompetent, resentful, and predatory.

it sounds like she's followed you around for years, is using and exploiting you, and she sounds really obsessed - if she's copying a lot of detail. To me, she sounds like a predatory stalker.

For example, that - it's illegal to keep copying people, to steal their identities, or something.

Once again, sorry to hear this has been happening to you.

Your view that she is very 'greedy' and 'hungry' is important.

The meaning of predatory behaviour of a person in psychology is:

"an individual ... whose actions are rapacious or exploitative."

In this light, your stalker seems to be predatory - she can't stop herself from copying you.

As for mental illness, it's too hard to say, but I'll give you a some possible examples:

These could be some causes of actions:

Evidence and proofs have been documented to prove everything so there is literally ZERO chance for Emily Robertson to deny or play victim's game that this is harassment or hater's attack. With evidence to back up whatever accusations, there is no chance for anyone to deny anything about Emily Robertson's abnormal behaviors and the history of stalking and thefting. If only the victim could step out then all will be instantly clear. Yet such information is impossible to reveal to the public due to privacy concerns and the fact Emily Robertson is nobody to worth the step.

Years ago, a rightful judgement has been made that Emily Robertson is shameless and dumb. She is trying to prove she is not, by stealing everything from whoever made those precise judgement on her (which is a shameful act itself), and disturbingly stalk her victim to the degree of maniac – all in return proves again what she is trying to disprove – she is shameless and dumb!

Read till the end for the thriller....

Let's take a look at the timelines of events when she steals literally everything from her target:

Freedom and peace of mind was deprived again from the innocent victim who she leeched on for years. You are rest assured after this victory of spying discovery, she is on her way for the Nth rounds of copying and thefting of what the victim is doing now....

This matter has now reached it severity and is taken seriously. Here are the petition requests in three categories:

-       Any new social media, video, live and image sharing platforms she'd use to stalk the victim or showcase content that she stole or will steal from the victim

3. Emily Robertson shall be banned from these platforms where she makes sales with work she has done through thefting:

-      Any other platforms she uses to make sales of her work that is a result of thefting, including the thefting of a career path

4. Emily Robertson shall be banned from conducting any social media related work, provided directly to a company or any third parties through a company. It is irresponsible to put such a person exploiting and harming others through social media to do social media work. Including but not limited to: