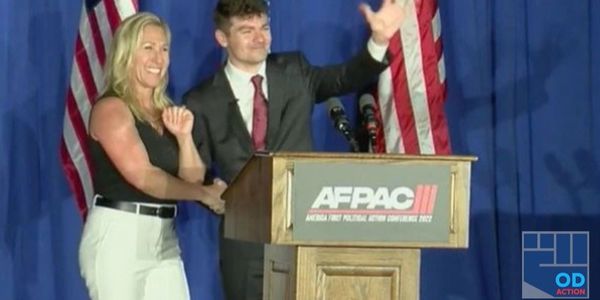 Demand Marjorie Taylor Greene be expelled from Congress for speaking at a neo-Nazi political conference!

The event's ringleader, Nicholas J. Fuentes, actually took the podium after Taylor Greene to publicly condemn the media for comparing Russian dictator Vladimir Putin to Adolf Hitler, suggesting such a comparison isn't even necessarily a bad thing in the first place. Other speakers predictably served up a smorgasbord of red-meat racism, homophobia, and anti-Semitism to an audience primed and ready to gobble up hate.

Add your name to demand Marjorie Taylor Greene be expelled from Congress for rubbing shoulders with neo-Nazis!

Taylor Greene praised conference attendees as "canceled" Americans before going on an unhinged rant about Nancy Pelosi, Justin Trudeau, abortion, and environmentalism. This is far from the first time Taylor Greene has been associated with these kinds of people — the first-term QAnon congresswoman is fond of white nationalist conspiracy theories and the shameless, right-wing radicals who promote them. Remember the "Jewish space lasers" responsible for last year's devastating wildfires out west?

Taylor Greene seems to believe her role in Congress is to generate as much outrage and controversy as she possibly can with a never-ending series of appalling statements, actions, and associations. It's long past time she was removed from office and replaced with someone who will take the job seriously.

Call upon Congress to expel Marjorie Taylor Greene from Congress!