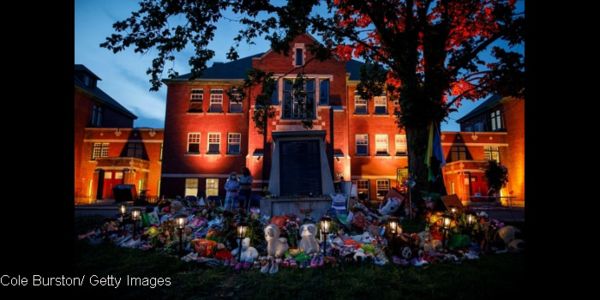 Demand that Canada commit to justice for Indigenous Peoples

These children should never have been taken from their families.

Residential schools were part of a colonial policy enshrined in Canadian law to eradicate Indigenous cultures, languages, and communities and break children's connections to their Indigenous identities. Parents who tried to prevent government agents from taking their children away to these schools were threatened with arrest. While the last school closed in 1996, intergenerational trauma, ongoing harms and discriminatory practices against Indigenous Peoples continue.

Because of discriminatory colonial policies, Métis, Inuit, and First Nations children continue to be disproportionately represented in the child welfare system. First Nations children living on reserve receive less money for healthcare and education than other children in Canada. Indigenous women, girls, and two-spirit people experience staggeringly high rates of violence. Inuit, Métis, and First Nations people too often experience racism when accessing or interacting with public services like policing and healthcare. And governments frequently approve industrial projects on Indigenous territories without free, prior, and informed consent or recognition of Indigenous laws and scientific knowledge.

The reports of the Royal Commission on Aboriginal Peoples in 1996, the Truth and Reconciliation Commission in 2015, the National Inquiry into Missing and Murdered Indigenous Women and Girls in 2019, plus numerous reviews by the UN and other international human rights bodies, have documented the extent of the harms against Indigenous Peoples in Canada, and made thousands of recommendations to Canada to ensure justice and accountability for Indigenous Peoples.

But despite the harms being well known, and recommendations for change clearly laying out the path forward, Canada continues to resist real justice and accountability. It has failed to implement the 6 recommendations made by the Truth and Reconciliation Commission regarding Missing Children and Unmarked Burials. It continues to litigate against First Nations children living on federally-controlled reserves, denying them the same levels of funding for basic services as other children in Canada. Canada is still fighting residential school and day school survivors in court. And it continues to resist calls from Indigenous Peoples to respect their right to self-determination and apply the principle of free, prior, and informed consent regarding industrial development on their territories.

To ensure justice and accountability—not only for the 215 children whose bodies were buried at the Kamloops Indian Residential School—but for all First Nations, Métis, and Inuit Peoples, Canada must take concrete action without delay.

On May 27, 2021, the remains of 215 Indigenous children were found on the grounds of the former Kamloops Indian Residential School. These children should never have been taken from their families.

Residential schools were part of a colonial policy to eradicate Indigenous cultures, languages, and communities. While the last school closed in 1996, intergenerational trauma, ongoing harms and discriminatory practices continue.

Canada is responsible for these colonial policies and practices, and Canada must take responsibility for ending human rights abuses against Indigenous peoples now. There must be justice and accountability for the harms that First Nations, Métis, and Inuit peoples in Canada experience.

I call on you to take the following actions without delay:

- Implement the 94 calls to action from the Truth and Reconciliation Commission;

- Implement the 213 calls for justice from the National Inquiry into Missing and Murdered Indigenous Women and Girls;

- Implement UN recommendations to halt resource development projects that do not have the free, prior, and informed consent of affected communities;

- Fully fund mental health and other services to support Indigenous peoples in dealing with traumas caused by colonial policies and practices, in accordance with their wishes;

- Where requested by affected communities, fully fund examinations of burial grounds at other former residential and day schools and ensure that Indigenous peoples control access to sites according to their own laws and customs;

- Investigate and prosecute perpetrators responsible for the deaths of Indigenous children at residential schools;

- Appoint a special rapporteur and create a legal framework to protect burial sites; and

- Urge the Catholic Church to release all records and photos related to residential schools, and again seek an apology and reparations for survivors and their families.

Thank you for your urgent attention to this matter.