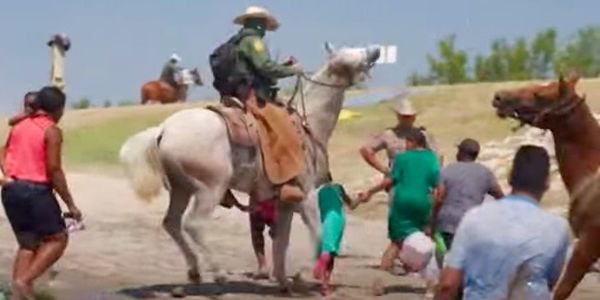 One month ago, Haiti endured a horrible earthquake that roiled the island. Homes, churches, hotels, and more collapsed into rubble, leaving tens of thousands of people displaced. Officials estimate that upwards of 50,000 homes were decimated nearly overnight.

In the wake of this calamity, refugees have turned to the United States as a beacon of hope in a time of sorrow. But recent video footage shows U.S. Border Patrol agents in Texas literally whipping the refugees with cords, as well as corralling the asylum seekers by lunging at them on horseback and physically grabbing at them. One agent was even overheard shouting at a Haitian migrant: "This is why your country's shit!"

Sign the petition to demand justice and an end to this cruelty!

These refugees came here believing the U.S. could be a place filled with benevolence and possibility. Carrying only plastic bags filled with some clothing and basic necessities like food, they arrived to ask for our help.

Seeking asylum is not a crime in the United States. In fact, it is a nationally and internationally protected human right, one for which the U.S. technically has a process. That process is not supposed to include heaving whips at those in need of help.

On top of that, the Biden administration has recently undertaken a mass deportation operation against Haitian refugees, sending back upwards of 6,000 people already.

The U.S. must live up to its moral responsibility as a powerful, resourceful nation to do right by those who are in desperate straits, and at the very least, do no harm to asylum seekers. So far we are failing in both respects.