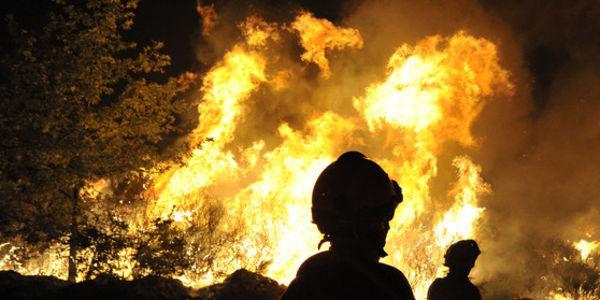 If You Want to Fix California's Wildfire Problem, Start With Climate Change

Care2 update, 8/21/2020: California is, once again, on fire. And every year, it's getting worse, due to Trump administration policies that continue to let climate change spiral out of control. But since California doesn't have enough salaried, professional firefighters to combat these disasters, the state is compelling prisoners to battle the flames — paying them as little as $2 a day.

But because prisons have been the sites of some of the largest COVID-19 outbreaks in the country, due to cramped conditions and insufficient masks and hand sanitizer, many incarcerated people are simply too sick to help. The answer to this problem is not to shove more prisoners into the flames — it's to fight climate change and stop these fires once and for all.

Donald Trump thinks he has the solution to what's shaping up to be one of California's worst fire seasons ever: Just add water.

In a tweet, he said: "California wildfires are being magnified & made so much worse by the bad environmental laws which aren't allowing massive amounts of readily available water to be properly utilized. It is being diverted into the Pacific Ocean. Must also tree clear to stop fire from spreading!"

It's shouldn't be enough for someone with no experience or credentials in wildland firefighting OR environmental policy to tweet about it. But the Commerce Department listened to Trump and put the National Marine Fisheries Service in control of California's water supplies, cutting the California Department of Fish and Wildlife out of the picture.

The agency said that, "American lives and property are at stake and swift action is needed."

California smells a rat, and so should you. State officials have repeatedly said that there is ample water for firefighting purposes — even if more water were diverted to the fires, it wouldn't solve the underlying problem.

What the state needs is more money for firefighting. And more critically, the state needs the federal government to take action on climate change. California and other Western states are experiencing unpredecented wildfire seasons every year because of hot, dry conditions directly due to our changing climate.

Instead of helping California's wildfires, Trump's move simply undermines the Endangered Species Act and its protections for numerous California species that rely on rivers, streams, and other waterways. It also opens the door to diverting the water that should belong to the environment by right to Central Valley farmers, who tend to support Trump and who have long complained that they need more water.

And Donald Trump needs to stop trying to make war on California with moves like this, which won't just undercut California's autonomy and hard-fought environmental policy. They'll also harm the California economy, damaging industries that need that "readily available water" to stay exactly where it is.

The real problem is climate change. Any other "solutions" are a diversion from that fact.