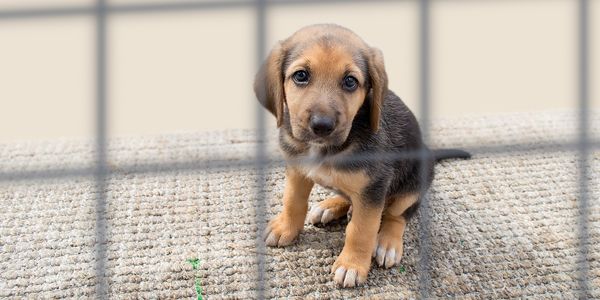 This Agency Is Charged With Animal Welfare, So Why Are They Ignoring Animal Suffering

When the US Department of Agriculture (USDA) inspectors arrived at Ruby Fur, an Iowa animal farm in 2017, they noticed two things: the heat and the suffering raccoons. Inside a metal barn, were around 300 raccoons in cages. The owner of the farm was raising them for animal testing and pets.

The raccoons looked lethargic, according to the Washington Post, "several [laid] with legs splayed, panting and drooling." During their multiple-day inspection, the temperature in the barn fluctuated between 96 and 100 degrees. And according to reports, the inspectors found themselves obligated to step in. In short order, they had rescued 10 of the 300 animals with plans to come back for the rest.

But according to the Post, not only did the "racoon rescue" never take place, the 10 previously rescued critters were returned to the abusing farm.

The inspectors were part of the USDA's Animal Care division (ACD) and thus, charged with ensuring "the humane treatment of animals covered by the Animal Welfare Act." So why did they abandon their duty to protect?

Beginning at the end of the Obama administration and sent into overdrive under the current president's. The ACD division has decided that fines and confiscations are no longer an effective tool against abusive farms, breeders and other businesses that work with live animals. Instead, they now believe that an educational approach is the most productive way to reign in animal mistreatment. Under the new USDA philosophy, zoos, breeders and the like are to be treated as partners rather than possible offenders. The enforcer has now become the educator. So when an offense occurs, the offender can expect a lesson instead of a license revocation.

The clear losers under this "new" USDA are the millions of animals and animal welfare advocates who count on the ACD division to maintain welfare standards. The winners are the industries that use animals for profit. In fact, according to reporters Karin Brulliard and William Wan, since Trump took office, animal-welfare citations issued by the USDA have plummeted. In 2016 there were nearly 5,000. Last year there were less than half that. Breeders, farmers, and others haven't suddenly started to treat their animals better. The USDA has just stopped caring and the industry knows it.

The Animal Care division's sole purpose is to look out for the welfare of animals. But they have now abandoned their mandate and animals will suffer because of it.

Care2
This Agency Is Charged With Animal Welfare, So Why Are They Ignoring Animal Suffering
PARTAGERTWEET