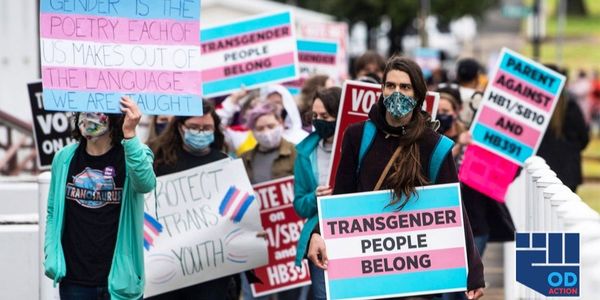 House Republicans in Ohio have taken their bigotry to another extreme, quietly passing a bill in the middle of the night that could subject transgender girls and women to a genital inspection if they are "accused." It's completely dystopian and pushed into a completely unrelated bill that would make changes to the Ohio's Teacher Residency Program.

According to the Equality Ohio and the Ohio High School Athletic Association (OSHAA), there is only one transgender girl in Ohio involved in high school athletics. This bill is clearly not rooted in any sort of fact, simply in holier-than-thou posturing. Not to mention, OSHAA already has a long list of standards required before transgender athletes can play, including at least a year of hormone therapy. The GOP is continuing to virtue signal and wage their war on marginalized children, it's unacceptable.

Add your name to demand a stop to the anti-trans amendment in Ohio!

The legislative policy director at Equality Ohio said that "having this third bill now slipped into an unrelated bill at the last moment is just such an additional slap in the face to our entire community, I know that there are a lot of folks in the LGBTQ community who are sitting there asking themselves, 'What did I do to them? because they keep coming after me' and I can't blame them for having that perspective." That question is a harrowing reality for kids across the nation.

Trans kids are more susceptible to suicide and being murdered – all this legislative rhetoric does is make it harder for them to stay alive. There will be blood on Ohio's hands should this pass.

Sign your name to tell the Ohio Senate to refuse to pass the bill with anti-trans amendments!