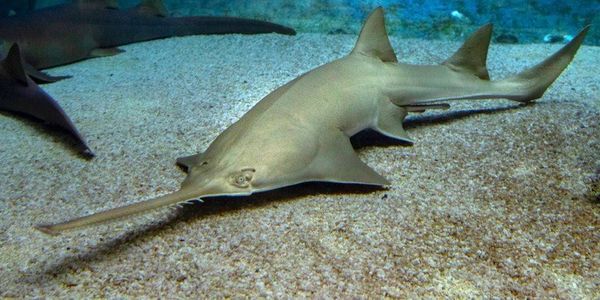 This endangered creature got tangled in fishing cord, and likely starved to death

A rare 12-foot-long fish in Florida may have died from being unable to open its mouth -- due to ropes left behind as part of crab traps.

The endangered sawfish, with a saw-like "nose" that extended approximately 5 feet, got wrapped up in a type of cord called palmer rope and wound up with its mouth roped shut, which may have led it to starve to death.

Sign the petition to demand Florida better regulate the use of marine traps, to save sawfish from extinction!

Two kind fishermen discovered the desperate creature and risked their own safety to try and remove the rope, but were unable to successfully free the animal. In the end, they had no choice but to release it back into the waters of the Indian River Lagoon.

To this day, we don't know what became of this poor sawfish, or if it ever managed to find a way to saw off its entrapment. But the odds are not good.

As an endangered species, sawfish are technically protected by law in Florida, but that doesn't mean they're actually kept safe from the many deadly objects lodged in Florida waters. Crab traps, palmer ropes, plastic debris, pollution, and more are all imperiling this unique creature. If state officials don't take action fast, sawfish will be "protected" in name only.

Care2
This endangered creature got tangled in fishing cord, and likely starved to death
PARTAGERTWEET