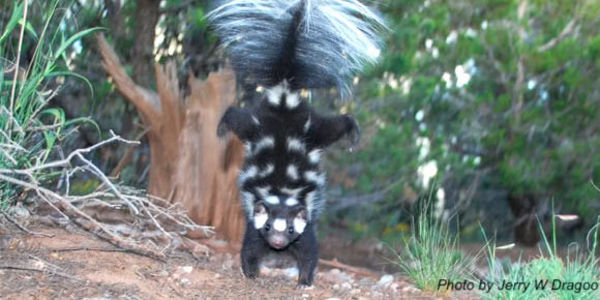 These tiny skunks do handstands to scare off most predators, except for us humans! Protect the spotted skunk!

Spotted skunks are known as "the acrobats of the skunk world." Why? Because these small, squirrel-sized creatures have a special trick to protect themselves from hungry predators: scare off the "bad guys" by jumping onto their front legs and doing a handstand, kicking their back legs and big fluffy tails up into the sky in order to look bigger.

These tiny beings have even been spotted successfully facing off with mountain lions and owls, and winning the who's-scariest competition!

These little guys are just too impressive. But unfortunately they're at risk due to their difficulties adapting to live in areas with lots of human construction. Unlike their relatives the bigger, more famous striped skunks, they prefer rural life.

Sign the petition to save these athletic spotted skunks!

Scientists have now identified seven species of spotted skunks, and at least one appears to be endangered -- the Plains spotted skunk. Endemic to the central plains area of the U.S., these skunks' habitat covers states such as Texas, Wyoming, and pretty much everything in between. This species has seen its population plummet to a frightening degree over the past 100 years, and researchers are worried for its stinky, handstand-y future.

We can't let wondrous animals like this fade out of existence. We especially can't let our need to develop more and more new housing construction be what snuffs them out.

Care2
These tiny skunks do handstands to scare off most predators, except for us humans! Protect the spotted skunk!
PARTAGERTWEET