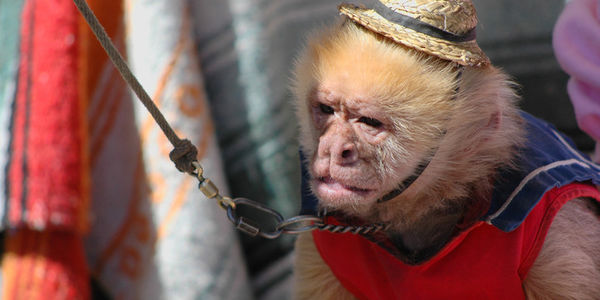 Let's be clear: monkeys and other primates are NOT pets. Not only is the idea of keeping them hostage as cute little toys insulting to these animals' intense intelligence — after all, they are humans' closest relatives — but additionally, it's also harmful towards their health.

Yet in the United Kingdom, people actually DO own monkeys as pets! Right now, in January 2021, there are as many as 5,000 primates being held captive in British homes or backyards. Those numbers don't even include primates locked in licensed zoos. Even worse, there aren't proper restrictions to limit breeding these animals — so greedy individuals can simply force already-captive monkeys to keep making more little babies, who will also spend a lifetime in misery.

But now, the British government is declaring that it may decide to ban people from owning apes, monkeys, marmosets, lemurs, capuchins, tamarins, and other primates as pets. This is fantastic news. We must demand lawmakers follow through with this legislation!

Sign the petition to demand that the UK government immediately ban private citizens from owning primates as pets!

As Lord Peter Henry Goldsmith, a former Attorney General for England, Wales, and Northern Ireland, has stated: "Primates are hugely intelligent and socially complex animals. When they are confined in tiny cages, often alone and with little stimulation, their lives are a misery."

Indeed, investigations have found that many monkeys' "pet-parents" chain them up in actual bird cages to contain them. Others are fed unhealthy human foods, including sodas, fast-food like burgers and fries, and serious drugs such as heroin, LSD, and cocaine.

There is absolutely NO reason for a random person or family to simply "have" a monkey. This is wrong, and has already caused untold damage and suffering to so many primates. It must end now.