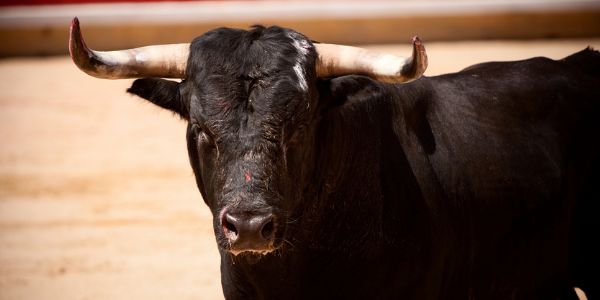 Campanito the Bull Escaped a Cruel Fighting Ring Just to Be Rammed to Death by a Car!

Early Sunday morning in the town of Brihuega, Spain, people had gathered to participate in animal cruelty. The event, known as concurso de recortadores, is when people take turns going into the ring with a massive bull and taunt it to prove their bravery. Only this time, the bull named Campanito had had enough. He escaped the ring and injured two people on his way out, only to have his life abruptly ended with someone ramming a car into him again and again.

But Campanito should never have been put in this situation to begin with. Animals do not exist for our entertainment and their suffering matters. Sign if you want to see this event canceled forever!

At the event, the people jump and do tricks and prance around the cornered animal who is already undoubtedly scared. They are trying to rile it up and then "escape" just in time, all to impress their friends. Bulls have been used in Spain and elsewhere for entertainment in this way for many years. But animal rights activists have long since understood the choice was morally wrong.

This weekend, Campanito was the last bull in the ring, weighing about a half a tonne (about 1000 lbs). He had probably been hearing the loud crowd taunt his fellow bulls all night. He must have been so scared when he finally burst through the doors and through the crowd, harming two people. He was clearly just trying to escape a situation that was designed to make him upset. His punishment? Death by car.

All of this could have been avoided and should be in the future. It's not safe for the bull or the people there and it's unethical as well. Sign the petition to end this event!

Care2
Campanito the Bull Escaped a Cruel Fighting Ring Just to Be Rammed to Death by a Car!
PARTAGERTWEET