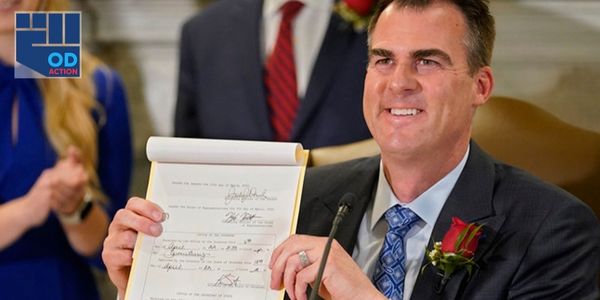 Tell Governor Kevin Stitt to veto the bill that would ban nearly all Oklahoma abortions!

Oklahoma lawmakers are taking advantage of the extremist momentum threatening to overturn Roe v. Wade by passing the most restrictive abortion law yet. Despite the leaked draft opinion, Roe v. Wade hasn't been overturned yet — Oklahoma legislators have no right to ban abortion at conception. That means that next to no one (including victims of sexual assault, incest, at-risk parents, and more) will have input in their reproductive health.

The president and CEO of Planned Parenthood of America, Alex McGill-Johnson, said that if the law is passed "Oklahoma will be the first state in the country to completely outlaw abortion – even while Roe still stands." McGill-Johnson went on to say that "what little abortion access is left in the state will be gone, and the crisis faced by Oklahoma patients and those that depend on access in the state will worsen."

In true right-wing, extremist fashion, Stitt has previously vowed to pass every piece of legislation that limits abortion access in his state. We need everyone in the country fighting for Oklahoma citizens' right to their own decisions regarding their reproductive health. If this bill passes, it only promises to encourage even more radical anti-choice legislation throughout the country.

Should Stitt sign the bill, all abortions services are expected to stop immediately. Oklahoma citizens are at risk of losing their right to choose, regardless of the SCOTUS decision, any day now — this is urgent.

Sign your name to call for the immediate veto of Oklahoma's extremist abortion law!