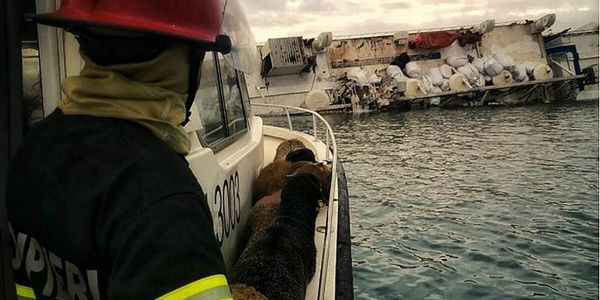 Almost 15,000 Sheep Drowned Because of the Carelessness of This Industry!

Just under 15,000 sheep have perished in the Black Sea. You read that correctly. 15,000 sheep, drowned. Why were they in the middle of the Black Sea in the first place? They were on a ship carrying them to slaughter.

The vessel transporting 15,000 sheep from Romania to Saudi Arabia overturned due to severe overcrowding. These innocent animals had no chance of survival as water poured in from all sides, and their thick coats quickly became heavily waterlogged. The sheep screamed for help as they slowly drowned, their legs and other body parts hanging out of their enclosures, now flipped sideways.

Romania's leading livestock producer and exporter, Acebop, must be held accountable. Even the association's president, Mary Pana, said, "If we cannot protect livestock during long-distance transports, we should outright ban them."

That's just what should happen! Sign the petition and demand that the European Union (EU) ban live animal exports to all non-EU countries.

Rescue crews only saved 32 of the sheep, or 0.002% of the herd. And just as these sheep were rescued from a watery grave, they were sent along to slaughter anyway.

Australia has previously placed a ban on live animal exports to the Middle East in response to a video showing sheep dying agonizing deaths due to heat stress aboard some of these export trips. But that ban was lifted when the colder months came around. We know there is a precedent for these bans already. And, obviously, temperatures are not the only factor that causes these animals to suffer and die when being transported.

There is only one way to ensure no more animals meet such a gruesome fate. Sign the petition and tell the EU to do the right thing and ban all live animal exports to non-EU countries!

Care2
Almost 15,000 Sheep Drowned Because of the Carelessness of This Industry!
PARTAGERTWEET