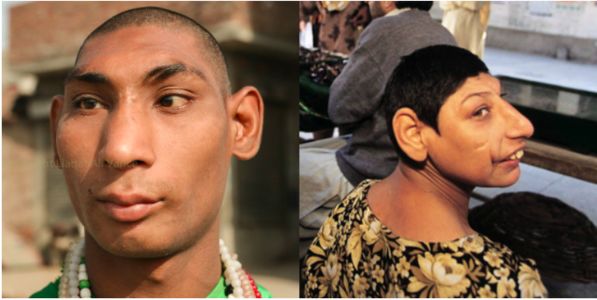 Demand an End to the Exploitation of "Rat Children" in Pakistan!

For most people, the birth of a first child is an exciting event they may have looked forward to for years. Tragically, some couples in Pakistan do not get to actually enjoy new parenthood because they allegedly "donate" their first born to the shrine of Shah Dola, a Sufi Saint who took care of disabled children. Reportedly, that they leave their child at this shrine in Gujrat City where the children are raised by the shrine administration and intentionally disabled to become a workforce of beggars. The ritual is apparently centered on the belief that this practice will bless couples with future fertility.

Sign the petition to demand the United Nations finally steps in to investigate these reports and protects the children if this is happening!

Reportedly, the children who are left at the shrine are forced to wear metal banded helmets that intentionally flatten the skull, thus giving the children a rodent-like head and stopping the brain from fully forming, causing mental disabilities. This simulates a real condition called microcephaly, which some children are naturally born with. But the vast majority of these children are not born this way. Their brains are stunted so that they will be dependent on caretakers as well as illicit strong donations as street beggars.

The disfiguring of children is illegal in Pakistan, as is abandoning them. But reports state that for whatever reason, shrine administrators are never held accountable for the maiming and exploitation of this army of kids. It's rumored that organized crime rents these children and ships them across the country to beg in different cities. They are effective beggars because the nationwide belief is that if you do not give to the "Rat Children", your own children will be cursed with a disability.

Pakistan is a member of the United Nations and thus subject to the United Nations Convention on Rights of the Child 1990 (UNCRC). It's time the international community stepped in and protected these vulnerable children from such abuse! Sign the petition to urge the UN to investigate and end this child abuse!

Care2
Demand an End to the Exploitation of "Rat Children" in Pakistan!
PARTAGERTWEET