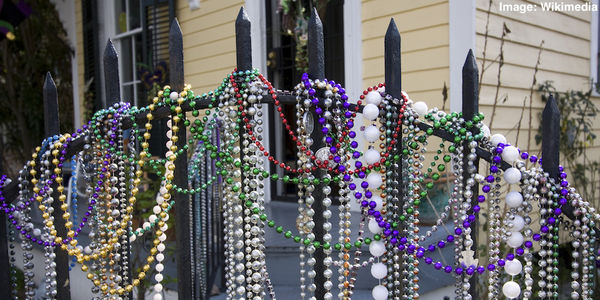 Mardi Gras, oh, Mardi Gras — so much to love about the most amazing of NOLA's festivals: king cakes, parades, time with family and friends, marching bands, indians, satire. It is truly the greatest free show on earth.

But Mardi Gras, can we get real here for a minute? We gotta do more about your trashy, toxic beads. In 2018, NOLA.com reported that 46 TONS OF BEADS were pulled from our clogged catch basins - you know, those metal grate-covered storm water drains? That critical piece of city infrastructure that keeps us from flooding during rainstorms (sometimes)?!?!?

And you know those cheap plastic beads are often toxic? TOXIC! Mardi Gras beads have been analyzed and found to contain toxic levels of lead, bromine, arsenic, phthalate plasticizers, halogens, cadmium, chromium, mercury and chlorine. Which then end up steeping a toxic tea in our storm drains. Yuck.

So, we're going to say it - Mardi Gras has a bead problem. Look, if people REALLY wanted those beads, would 46 TONS end up down the drain? People want glittery shoes, blinking whatevers, coconuts, moon pies, stuffed animals, footballs - the majority of beads are just parade-filler.

So let's ban beads! Just get rid of 'em completely unless and until biodegradable, water soluble, non-toxic beads are developed and available. Sign and share the petition and demand that krewes throw items that are less toxic and trashy.