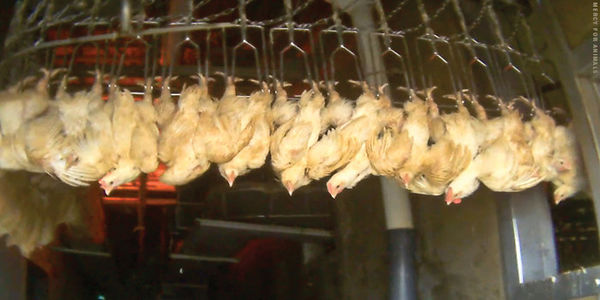 Each year, over 9 billion chickens and turkeys are slaughtered in the United States, yet there are no federal regulations to protect them from inhumane handling.

The US Department of Agriculture does virtually nothing to ensure that the deaths of these birds are not filled with pain and suffering. In fact, even though the USDA recently withdrew a proposed regulation to allow poultry slaughterhouses to operate at faster speeds, many plants continue to operate at such speeds because the department has not withdrawn dozens of waivers granted by the previous administration.

The frenzied pace at high-speed slaughterhouses can be greatly detrimental to the welfare of birds. Birds are subject to unloading, shackling, and stunning at speeds that cause injury, pain, and sometimes death by methods other than slaughter, such as drowning, blunt force trauma, or asphyxiation.

I applaud the administration's decision to withdraw the proposed line speed rule that could increase the suffering of birds at slaughter. However, dozens of poultry slaughter plants are operating under line speed waivers granted before the rule was withdrawn. Because the waivers still stand, high slaughter speeds continue to pose a threat to the welfare of birds. I request that the Secretary withdraw all poultry line speed waivers to prevent the suffering of thousands — if not millions — of birds annually.

Line speed waivers that allow faster slaughter increase the possibility that birds will be bruised or otherwise injured and that birds will die other than by slaughter. Increased line speeds pose a risk to bird welfare in several ways:

- Less time per bird can lead to more incidents of improper shackling, such as shackling by one leg or by a wing or the head. Improper shackling can result in birds not being properly stunned, which leads to birds missing the throat-cutting machine and entering the scald tank alive.

- Less time for birds to settle after being shackled can result in increased flapping at the entrance to the water-bath stunner, which can lead to pre-stun shocks, delayed or interrupted stunning, and even birds missing the stunner altogether.

- Less time in the water-bath stunner can result in inadequate stunning, which can lead to a greater number of birds missing the throat-cutting machine, which in turn can result in birds entering the scalding tank while still alive and dying other than by slaughter.

- Workers not able to keep up with the increased speeds may act out their frustrations by abusing live birds, which can case injuries such as bruises and fractures.

- Faster line speeds will shorten the time available to workers to manually cut birds who miss the throat-cutting machine, thereby preventing them from entering the scalding tank while still alive and dying other than by slaughter.

- A decreased bleed time can also result in more birds entering the scald tank alive and dying other than by slaughter.

I also request that you promulgate regulations covering humane handling of birds at slaughter, which will reduce animal suffering as well as the adulteration of poultry products. Thank you for your consideration.