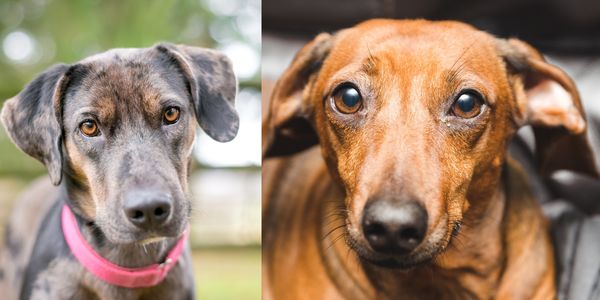 They had a disagreement, so he kidnapped and murdered her two dogs. Justice for Wheezy and Mason!

What do you do when you have a disagreement with a loved one? Maybe you take a walk to clear your head, or call a friend. Maybe you do a grounding activity, like reading, or crafting, or listening to music, before coming back to them ready to try and understand each other.

But William Petty of Volusia County, Florida decided that having a fight with his fiancé warranted his kidnapping her two dogs, driving them out to the woods, and mercilessly executing them by gunshot.

Sign the petition demanding that William Petty be barred from ever owning or interacting with domestic animals ever again, and be mandated to get the help he needs.

It's unclear what Petty and his fiancé fought about that day at his home. Frankly, it doesn't matter. There is no argument in the world that justifies what happened next.

Petty reacted to the argument by grabbing his fiancé's two sweet dogs, Wheezy and Mason, and loading them into his car. Wheezy was a sweet larger mutt mostly mixed with Catahoula Leopard Dog, while Mason was a tiny dachshund -- they couldn't have been more different, but their owner made them siblings, a family. They went willingly with Petty, trusting that he was part of their family as well.

But he betrayed their trust. When Petty got to a wooded area a good distance away, he took the pups out of the car. Maybe they thought they were going on a hike, or headed to a park, or on their way to a lake for a swim. William Petty then fired a gun directly at Wheezy, shooting her in the head and killing her instantly. Poor Mason witnessed his sister's death just before Petty proceeded to shoot him dead. He then callously dumped their bodies in the thick of the forest.

Worse still is the detail that Petty took a child with him -- a 16-year-old boy who was with the couple at the time of the fight -- and tried to force him to perform one of the murders, Mason's. The poor, traumatized boy bravely refused, shooting into the ground and delaying Mason's murder for only moments.

It is clear that Petty has no regard for life, be it animal or human. Killing two innocent dogs in cold blood and abusing a child by forcing him to be involved is truly heinous. And no matter how many fines he must pay, or years in prison he might spend, that will not solve the underlying issue. He has been charged, but not yet sentenced, and we need to make sure his sentencing includes a real solution to keep animals and people safe from William Petty.

Sign the petition asking that William Petty never be allowed to own, care for, or have involved connections with domestic animals ever again, and that he receives evaluation and help before he harms anyone else.

Care2
They had a disagreement, so he kidnapped and murdered her two dogs. Justice for Wheezy and Mason!
PARTAGERTWEET