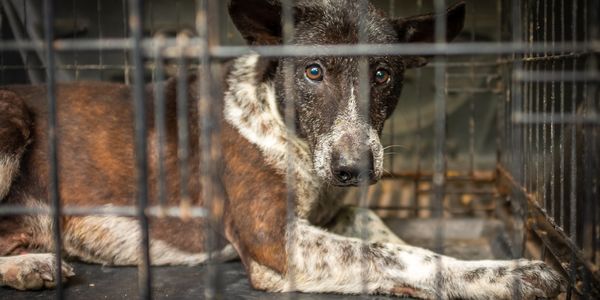 This puppy farm was just a windowless, locked container where dogs cowered in their own blood, urine, and feces

An abusive, illegal puppy breeding operation so horrendous that it has left witnesses "finding it really difficult to carry on with regular life" has been uncovered in the United Kingdom.

The facility was a locked, windowless container full of tiny cages, many too small for any dog to possibly turn around or get comfortable. The dogs there were covered and matted in blood and feces. They also cowered in terror at any human who came close, wordless evidence of intense neglect and abuse.

The dogs involved in the above scheme have thankfully been rescued, but the human responsible must be held accountable. Sign the petition and encourage the Bedfordshire Police to exhaust every resource to find whoever kept these dogs captive while exploiting and abusing them!

Caddington is a tiny village about 30 miles north of London -- so tiny, in fact, that residents were shocked that such a horrific case of animal cruelty could have been going on for so long.

But when Kristy Horton found a badly hurt dog, covered in blood and clearly in need of help, she sounded the alarm. She had also heard whining and barking coming from a locked container nearby, so before she took the poor hurt pup to a vet, she called the Bedfordshire Police and the RSPCA.

When the police finally gained entry to the locked container, Kristy was back and able to bear witness to the horror inside. A pitch black room, cut off from fresh air or light, was filled with filthy, tight cages. The dogs inside were simultaneously happy to see people, but then immediately cowered and trembled in fear when their saviors came closer -- as much as the pups clearly wanted to love and be loved, their history of abuse made it impossible for them to completely trust humans.

That abuse was spelled out everywhere: one dog, a sweet Staffy, was starved to the point of becoming skin and bones. Another female dog had clearly been bred so often, without rest or proper medical care, that a witness described her body as "spent from having liters." Photos show dogs standing in piles and pools of feces mixed with blood and urine. The whole thing was straight out of a nightmare.

Police say that all signs point to this being the site of a nefarious puppy farm. In the UK, breeding dogs three or more times within 12 months without a license is illegal. Obviously, so is violent abuse against animals and neglecting to maintain their proper welfare. The latter has clearly taken place, and the former probably has too. In a tiny town, with many many witnesses -- many of which say that they have been suspicious of this site for some time -- there is a very good chance of finding and bringing to justice whoever did this.

The Bedfordshire Police are asking for anyone with information to contact them through their website. But for animal lovers and protectors all over the world, there is still something we can do. Sign the petition showing your support for their investigation, and ask that they not rest until they find whoever abused and neglected these poor dogs!

Care2
This puppy farm was just a windowless, locked container where dogs cowered in their own blood, urine, and feces
PARTAGERTWEET