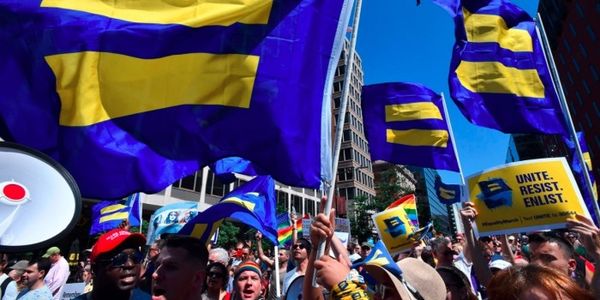 Pledge to Be an Equality Voter!

The Human Rights Campaign (HRC) is seeking Equality Voters in our priority swing states.  Are you one?  Are you registered to vote, and plan to vote for LGBTQ Equality in November?  Then join us.

So far this primary season, LGBTQ voters have turned out in record numbers. In early states like New Hampshire, LGBTQ voters represented 7% of the electorate despite representing 4.7% of the population. On Super Tuesday those numbers swelled even more. Across the Super Tuesday states overall, 9% of the electorate identified as LGBTQ, double the LGBTQ population of 4.4% across these states.

Nationwide, there are an estimated minimum of 11 million LGBTQ voters -- and millions more allies -- who will play a decisive role in the 2020 elections. Using decades of HRC polling, membership information and other proprietary data, HRC worked  to identify 57 million "Equality Voters" nationwide who prioritize LGBTQ-inclusive policies when making decisions about which candidates to support. In 2018, HRC utilized this data to mobilize "Equality Voters" in key races across the country and we succeeded.  "Equality Voters" accounted for 29% of the 2018 electorate, making it one of the most substantial voting blocs in the election. Their turnout increased from 36% in the 2014 midterm elections to 56% in 2018, a dramatic increase that is expected to continue in 2020.

It's time to take our country back.  Will you pledge to vote with the Human Rights Campaign this November?

Care2
Pledge to Be an Equality Voter!
PARTAGERTWEET