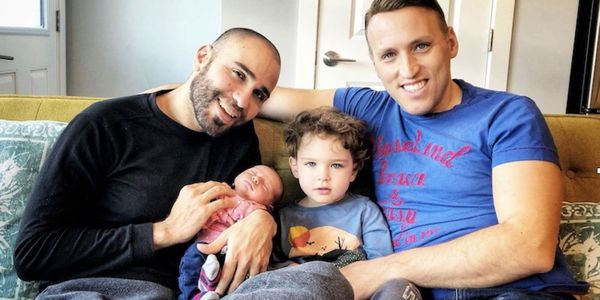 Don't Let the U.S. State Department Discriminate Against this Family!

The U.S. government tried to deny citizenship to the baby of a married gay couple by saying she was "born out of wedlock." Immigration Equality and Lambda Legal sued and won, but the government just appealed! We need your help to tell the U.S. State Department to stop discriminating against this family!

In 2016, they welcomed their first child, Lev, into their lives. Born in Canada through surrogacy, their son was rightfully recognized as a U.S. citizen at birth.

Everything was going as planned for the Kiviti family until Roee and Adiel's baby girl, Kessem, was born in Canada in 2019. The U.S. State Department decided to determine their daughter's citizenship through a provision of the Immigration and Nationality Act that only applies to children "born out of wedlock."

The government refused to recognize Roee and Adiel's rights as a married couple and denied baby Kessem's U.S. citizenship, even though both of her fathers are U.S. citizens. This stance is clearly unconstitutional, discriminatory, and morally reprehensible.

In September 2019, Immigration Equality and Lambda Legal sued the State Department on behalf of Roee and Adiel Kiviti and their daughter, Kessem. While they won their case, the State Department recently appealed the decision — thrusting this family into uncertainty once more.

As America's leading LGBTQ and HIV-positive immigrant rights organization, Immigration Equality will continue to fight for the Kivitis' right to be recognized as a family. Will you join us?