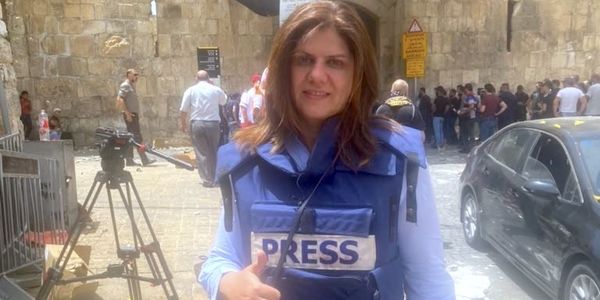 Israel's Government Has a History of Systematically Targeting and Killing Journalists. Tell the International Criminal Court to Investigate It for War Crimes!

In a horrifying act, Israeli military forces shot and killed a 51-year-old Palestinian-American journalist named Shireen Abu Akleh on Wednesday, May 11, 2022. Abu Akleh had been reporting on an Israeli raid in the West Bank, and was famous throughout the Middle East for her reporting. She was working for Al Jazeera, which released a statement on her death: "Abu Akleh was shot in the face, on purpose, while doing what she has been doing since 1997 for Al Jazeera: telling the truth."

Authorities couldn't even allow her memory to be grieved in peace. During the journalist's funeral in Jerusalem, as mourners carried her coffin and honored Abu Akleh's legacy, Israeli police stormed the procession -- beating civilians and detonating stun grenades. Police had previously agreed to the funeral procession's route, and higher-ups had apparently warned officer to "minimize friction" with civilians, yet police erupted into violence anyway.

Sign the petition to urge the International Criminal Court to formally investigate the Israeli government's systematic targeting of journalists working in Palestine!

Experts estimate that Israel has killed more than 50 Palestinian journalists since 2001. In 2012, Israeli soldiers beat Palestinian journalists in an intentional effort to distrupt their reporting. Last year, Israeli soldiers detained seven Palestinian reporters who had been covering non-violent protests. Later that same year, Dduring the May 2021 war, Israel bombed the Gaza City media building, killing 254 people. The list goes on.

In a gruesome video of the recent shooting, Abu Akleh and three other journalists are wearing helmets and vests clearly marked "Press." During that same incident, Israeli military forces also shot another Al Jazeera journalist in the back; fortunately that individual is currently in stable condition. Abu Akleh's colleague, Shatha Hanaysha, said there were no confrontations at the time of the shooting, and no evidence of remorse afterwards: "They did not stop firing even after she collapsed. I couldn't even extend my arm to pull her because of the shots. The army was adamant on shooting to kill."

Care2
Israel's Government Has a History of Systematically Targeting and Killing Journalists. Tell the International Criminal Court to Investigate It for War Crimes!
PARTAGERTWEET