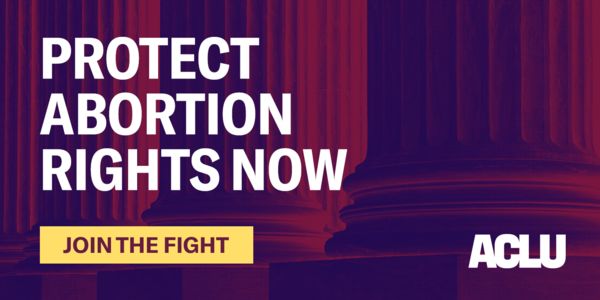 Defend Abortion Rights with the ACLU

On December 1st, Mississippi asked the Supreme Court to overturn Roe v. Wade. If the Court goes that route, it would mean that there is no federal constitutional right to an abortion. Full stop. If that were to happen, about half the states in the country would quickly ban abortion. And if there is a Congress and President hostile to reproductive rights in 2024, we could well see a ban on abortion that applies nationwide.

But even if the Court stops short of expressly overturning Roe v. Wade, if it upholds Mississippi's law, it will allow states to dramatically roll back our rights. It would give a green light to states (and Congress) to continue to push more bans, setting off an explosion of anti-abortion legislation across the country.

Even now, we know the right to abortion is not a true reality for many people in our country and that reality disproportionately harms specific communities. Restricting abortion is rooted in systemic racism, misogyny, and other structural inequities. And that means people struggling financially, Indigenous people, Black people, people of color, people who are undocumented, and young people suffer the most.

This impact will only be magnified if the right to abortion is further restricted or eliminated nationwide. We must fight back – add your name to get involved today.

So while the Court's ruling will likely not come for months, all of us dedicated to defending abortion rights will remain relentless: We at the ACLU are positioned to fight back with a national and affiliate presence in all 50 states, D.C., and Puerto Rico. We've blocked over 20 abortion restrictions across the states in 2021 alone – and our work in the months ahead will amplify that reach as we continue to both block state attacks and simultaneously work to expand protections for abortion at the state and federal level. Sign up to make sure you get all the updates on the fight to protect abortion – add your name.