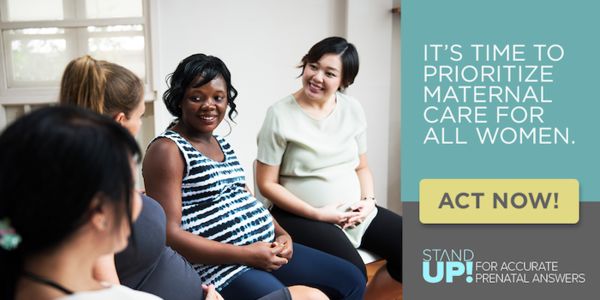 ADD YOUR NAME: Medicaid program should expand NIPT coverage to all women!

All pregnant women deserve access to the safest, most accurate prenatal testing available, regardless of race, socioeconomic status, or the state she lives in.

Yet many of the most vulnerable mothers on state Medicaid programs are still denied coverage for non-invasive prenatal testing(NIPT). In fact, Medicaid programs in 33 states still do not offer unrestricted NIPT coverage, including your state.

Add your name to let your state government leaders know that equal access to non-invasive prenatal testing for all mothers matters to people like yourself who care about women's health.

I am writing to express my concern over our state's lack of NIPT Medicaid coverage for pregnant women.

Screening tests are a critical component of prenatal care, allowing expecting mothers to identify whether their baby is more or less likely to have certain genetic disorders – such as trisomy 21 (Down syndrome), trisomy 18, and trisomy 13. These screening tests include options like traditional serum or combined screening, as well as newer options like non-invasive prenatal screening tests (NIPT).

These tests, which use a mother's blood sample to analyze a baby's DNA, provide more accurate results than traditional screening methods. In fact, a 2015 study published in the New England Journal of Medicine showed that 21 percent of Down Syndrome cases in pregnancies were missed with traditional screening compared with NIPT. The same study showed that older screening methods also resulted in a 95x increase in false-positive results for common chromosomal abnormalities, causing undue stress on expecting mothers, as well as unnecessary referrals to specialists for further diagnostic or invasive testing.

However, many of the most vulnerable mothers on state Medicaid programs are still denied coverage for crucial NIPT testing. Medicaid programs in 33 states still do not offer unrestricted NIPT coverage, including our state.

I urge you to change the discriminatory Medicaid policies in your state that jeopardize the wellbeing of pregnant women. You have the opportunity to use your position to positively impact thousands of women per year by changing the coverage policy to include NIPT for all women.