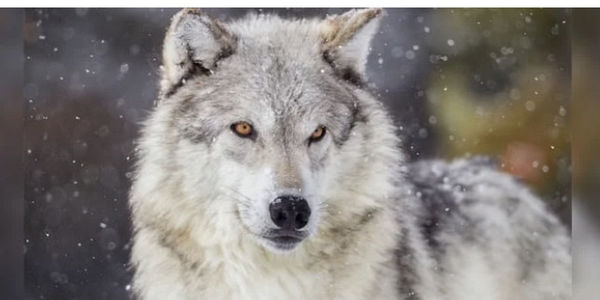 A quickly-scheduled wolf hunting season in Wisconsin has been halted after less than 72, due to the fact that hunters brutally gunned down and killed 216 of these beautiful, spiritual-looking, wild animals, a fifth of the state's entire wolf population. They exceeded the kill quota by over 80%. (Acknowledgements, In Defense of Animals. Thank you 😊).
This was so unnecessary. Wolves get a bad reputation as scary and dangerous, but the risk that wild wolves pose to humans is actually extremely low; they are often very scared of humans and avoid us. As for the predation on deer, elk and moose, why do human hunters think they have more right to the deer, elk and moose when wolves are native predators who natural prey upon those animals and have done so for thousands/millions of years, when humans (unlike wolves) don't even need to hunt in order to survive? As for the predation on farm animals, wolves can be kept away from farm animals by the use of electric fences, guns being fired into the air to scare them away and guard dogs (especially if the guard dogs can be trained to not kill or hurt the wolves but just bark and ward them off, or their presence could just deter the wolves). Wolves, unlike farmers and cattle and sheep, are native, apex predators who are vital to the health of the ecosystems they are native to, such as America. Wolves should be respected as being among the oldest existing animals in the USA, along with the other native wildlife and, of course, Native Americans. They should be allowed to live and live well. Those 216 wolves in Wisconsin did not deserve to die. Can you imagine the outcry and media coverage if the hunters had murdered 216 innocent humans? Wolves are sentient beings who have feelings, social lives, love their families, feed and care for their families and packs, protect their cubs and do a lot of good for the ecosystems to which they are native, and far, far less harm to the planet than humans do.
Please sign and share this petition to help get Wisconsin to pass legislation to make wolves a protected species! If you live in Wisconsin, please contact your local representatives about this issue.
Thank you 😊.