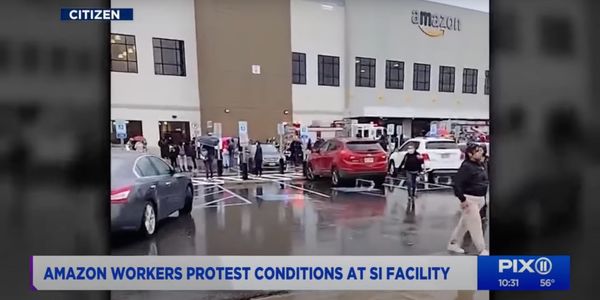 A Fire Broke Out at an Amazon Warehouse. Amazon Suspended the Workers Who Went Home.

After a warehouse fire in Staten Island left some Amazon employees feeling unsafe, the company suspended the workers who refused to continue working their shifts. Workers should not be made to choose between their physical safety and their livelihoods!

Sign the petition to demand Amazon implement safer labor practices and stop punishing its employees for protecting themselves!

"The issue that people had was the building still reeked with smoke, it was difficult to breathe at some workstations," said a suspended employee. "We wanted to be sent home with pay because it was unsafe."

The fire began Monday afternoon, and the day-shift workers were sent home. But when it came time for the night shift, the evening workers were told to "remain in a break area until management figured out the situation," according to the vice president of the Amazon Labor Union. Dozens of employees raised concerns about fire safety and refused to work. "Some worried that the air at the warehouse might not be safe to breathe because of smoke or fumes from the fire."

Earlier this year, the workers at the Staten Island warehouse voted to unionize -- and Amazon continues to challenge the results. Under federal labor law, employees have a right to protest a dangerous work environment. It's clear that these workers are being unjustly punished. In fact, the union is filing an unfair-labor-practice charge in response to the suspensions.

Sign the petition to demand Amazon implement safer labor practices and stop punishing its employees for protecting themselves!

Care2
A Fire Broke Out at an Amazon Warehouse. Amazon Suspended the Workers Who Went Home.
PARTAGERTWEET