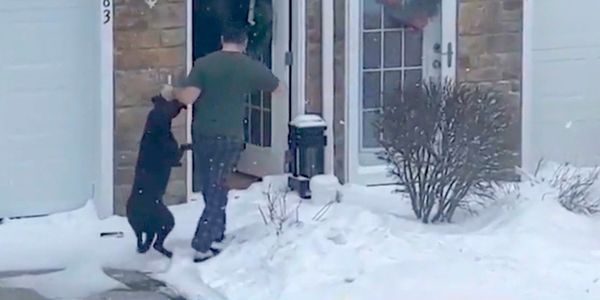 He beat and starved his dog in the freezing cold. Yet police let him keep her.

*UPDATE* Heartening news! Zac Brooks has been charged with animal neglect and has agreed to give up custody of the poor dog he abused, whose name we've since learned is Echo. We are so relieved that Echo is safe, but animal neglect is just a simple misdemeanor in Iowa, and hardly feels like jutstice in this case. Please keep signing and sharing the petition urging Iowa to strengthen its animal welfare laws!

He was caught on camera kicking, dragging, and abusing his dog, even throwing heavy objects like blocks of wood at the poor helpless pooch. Then on top of everything else, Zac Brooks kept his dog outside in the garage in freezing cold weather without any food or water at all!

Yet police in Waukee, Iowa decided to give this "friendly" man a second chance. He's keeping this dog that he's so violently abusing, and getting off nearly scot-free with a misdemeanor animal neglect charge.

Officers tried to explain away their extremely suspect decision by claiming they couldn't observe any obvious external injuries on the poor, beaten dog. They didn't take the animal to any vets or experts to back them up — they just said the animal looked fine, and so that apparently was that.

But Zac Brooks's neighbor says the man is not to be trusted with an animal. The reason he took videos of such violence and cruelty in the first place is because he'd already witnessed weeks and weeks of Brooks attacking his loyal, defenseless dog. Finally, he couldn't take it any more and recorded proof of the man's animal abuse.

But even with this footage, police just don't seem to think it's important.

Now, a city council member, Anna Bergman, is demanding that police do their jobs and finally take this pup to get properly checked out for internal injuries by a qualified veterinarian. She's also urging the state to pass stronger laws in protection of animal welfare.

Care2
He beat and starved his dog in the freezing cold. Yet police let him keep her.
PARTAGERTWEET