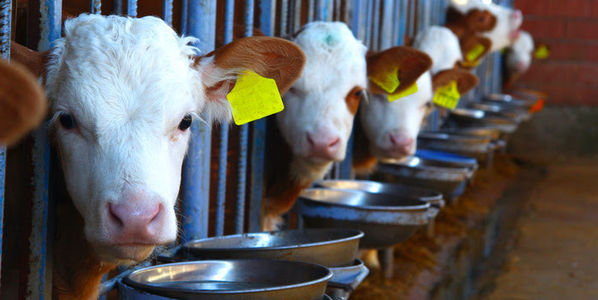 In the United Kingdom, Farmers Can Legally Feed Their Animals Plastic

The United Kingdom mad cow scare is long over but if today's cattle knew what their farmers were feeding them you would have some pretty bitter bovine.

That's because in the U.K. up to 0.15% of plastic is allowed to go into feed for animals destined for human consumption.

As the Guardian reports: "More than 650,000 tonnes of unused food, from loaves of bread to Mars bars, are saved from landfill each year in the UK by being turned into animal feed." This food is often still packaged when it goes through the recycling process as it is turned into animal feed. And because the machinery used to strip the unwanted food from its plastic wrapping isn't able to separate 100% of the plastic, the Food Standards Agency permits feed to contain a part of the material.

This revelation is bad enough. But when you realize the final destination for that plastic is your body, it becomes even more disturbing.

One expert who specialized in microplastics and interviewed by the newspaper, Dr. Heather Leslie, suggested that there should be no amount of plastic in animal feed at all. In fact, the EU level of acceptable plastics is currently set at 0% although that may not be the actual plastic content of the feed.

Microplastics can easily be ingested and pass from the gut to bloodstream which could have a host of negative effects currently not completely understood. If that is the case, how can we be sure that the plastics being fed to our animals aren't going to have a deleterious effect on their health or ours since we are the final consumer?

It is imperative that we understand the health consequences of feeding these microplastics to our animals. But until we do there should be no legal limit of plastic allowed.

Care2
In the United Kingdom, Farmers Can Legally Feed Their Animals Plastic
CONDIVIDITWEET