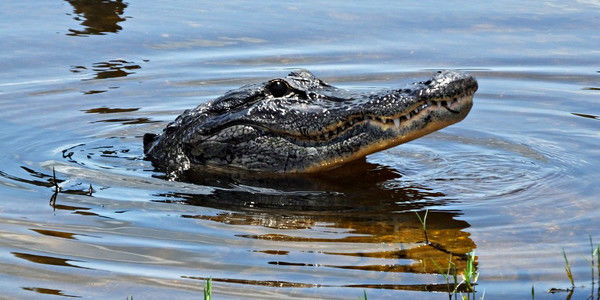 People Fed This Alligator. Then Florida Officials Hired a Hitman to Take the Animal Out.

The massive alligator in Florida's Silver Springs State Park was practically a celebrity among kayakers, paddleboarders, and other nature enthusiasts in the area. Measuring nearly 12 feet long - larger than any other gators in the vicinity - he liked to find sunny spots on the edge of the water and spread out to catch his daily rays. This was how life went for him for approximately 40 years.

But in late February 2022, the Florida Fish and Wildlife Conservation Commission decided to hire a trapper to get rid of the animal. And so, at dusk, people paddling in the waters nearby heard a single gunshot go off: the trapper had shot the poor creature right in the head.

Sign the petition to demand Florida authorities implement a thorough public education campaign to discourage the public from feeding wildlife! They must also institute a no-kill policy for animals that, through no fault of their own, are still fed anyway.

Someone - or rather, many people - had probably been feeding this Florida alligator. Unfortunately, that alleged human interference ultimately caused this alligator's death, both by causing him to be frighteningly large, and making him feel too cozy and comfortable around humans.

It all started when the alligator got too close to a paddleboarder visiting the Silver Springs State Park, north of Orlando, Florida. As the outdoor enthusiast glazed through the waters, the curious gator slowly swam over to check her out. He was in his own home waters, after all. Expecting food, it opened its jaws, scaring her. While the animal ultimately went away and no one was hurt, the interaction caught the public's attention.

Within a matter of months, he was dead.

As local lawyer, activist, and paddleboarder Brady Toensing told reporters, the alligator was likely "doomed by people illegally feeding it." The outcome is not the poor creature's fault - but it is a shameful tragedy, and one that we must prevent from occurring in the future. It's not fair for human actions to dictate a confused wild animal's fate! If wildlife aren't allowed to live in a state park, where are they allowed?

Instead of hiring a gunman to assassinate the decades-old alligator, the Florida Fish and Wildlife Conservation Commission should have implemented other policies. Now, after the execution is done, the agency must create new protocols to avoid such a regrettable loss of life again. Florida authorities must create a more thorough public education campaign with signs informing the public that feeding wildlife is signing its death warrant. And because the sad truth is that some people will still feed the animals anyway, Florida officials must create a no-kill policy for those wildlife that humans still feed.

Care2
People Fed This Alligator. Then Florida Officials Hired a Hitman to Take the Animal Out.
CONDIVIDITWEET