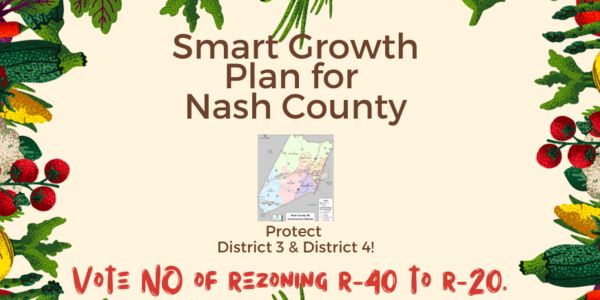 I am signing this petition as a concerned citizen of the Southern Nash County community by the rate at which a large quantity of farmland has been rezoned from R-40 to R-20 in a quick turnaround. I oppose the recent and current proposed rezoning and development of current and future proposed property in District 3 and District 4 of Nash County (South of 97) to less of R-40 until an updated economic land development plan is complete. And out of concern of the quality of life preservation and negative agricultural impact. While the local community may be unable to prevent development, that in itself will be detrimental to the area, nearly all residents in the Bailey, Green Pond, Mount Pleasant neighborhoods are completely opposed to the addition of multi-family housing that will cause traffic and safety problems, create even more problems with schools that are already over-capacity, destroy local wildlife habitat, and potentially lower the property values of the existing community.

Citizens have not had sufficient time or information to fully understand the proposals and the agricultural and environmental consequences that development might cause for the surrounding area.

We are also aware that the current land economic development plan is outdated and updated by a consulting firm from Greenville, NC, that will not be finished until the end of 2022. We ask that you please VOTE NO for current docketed and future rezoning from R40 to R20 properties.
TOP reasons for concern:
Agriculture land is being sold and will negatively impact Nash County's jobs market and the prosperous farming industry's revenues.
The new development will destroy nearby farmland due to the high density without proper buffering and the volume of septic tanks in sandy soil, producing a 12-17% increase of nitrate into the ground.
It is harming the future of agricultural land and business opportunities.
Traffic and safety of the community
Lack of supporting infrastructure such as police, fire, ems, schools, doctors, businesses to support the influx of people.
Lack of ordinance, rules, procedures in place in which a town or municipality would have.
Increase of trespassing, theft, crime, pollution of farms, littering, dumping on land.
Decrease of emergency personnel response time.
Lack of technology infrastructure such as internet, phone, cell phone service.
Lack of schools to support the number of people.
Schools in the area are already reported at overcapacity. The council should not approve multi-family dwellings that create or exacerbate a situation that will cause school concurrency to fail for this proposal and/or other approved plans.
Destroying Wildlife habitats
I urge you to pause on the current docket and future rezoning of R-40 to R-20 until a proper plan is in place. Additionally, a plan focuses on improving the quality of life for all residents and allowing sufficient time to conduct thorough environmental impact studies disseminated among citizens potentially affected by development. Plans for parks and green spaces will not fall upon the taxpayer to be responsible for in the future, which is not included in the current plans or plans of rezoned in the last 12 months.

I am concerned about the economic future for this end of the county. Growth is a good thing; however, a proper plan must be implemented. We have to think about the future economy of our community, and we need a Smart Growth Plan.

Thank you for your reconsideration and for thinking about the future of Southern Nash County.