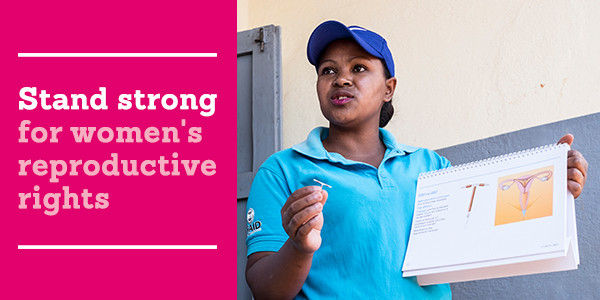 One of President Trump's first acts when he took office in 2017 was to reinstate the "Global Gag Rule" — a regulation that cuts off U.S. Government funding for all international health organizations providing information and services related to abortion. This draconian rule goes far beyond preventing organizations from providing or discussing legal abortion care, even with their own resources. It uses critical U.S. Government aid dollars to stifle the conversations women have with their doctors.

And just a few weeks ago, the Trump Administration introduced a new domestic version of this gag rule, which we know will have long-lasting effects.

In the two years since the Global Gag Rule was announced, organizations like MSI, that have steadfastly refused to compromise high-quality care for the women and girls they serve, are facing severe funding shortages that impact their ability to provide lifesaving services. At MSI alone, their $50 million funding gap will result in 1.8 million unintended pregnancies, 600,000 unsafe abortions and 4,600 avoidable maternal deaths.

By 2020, nearly 1.4 million women globally will go without access to MSI services and care.

The U.S. Government is the world's largest funder of global family planning efforts, and so it sets the tone on women's reproductive health globally. The Trump Administration's policies and rhetoric are causing a regressive "chilling effect" on women's choice and rights, making already challenging conversations around sex, abortion and contraception even more stigmatized.

There is a silver lining: The Trump Administration's attacks on reproductive choice have sparked a powerful movement around the world to support women's choice and rights. Now, we're mobilizing these advocates to fight for change.

Join the movement: stand with MSI, women, girls and family planning providers around the globe who support access to safe abortion and contraception everywhere. We condemn in the strongest possible terms the Trump Administration's domestic and Global Gag Rules.