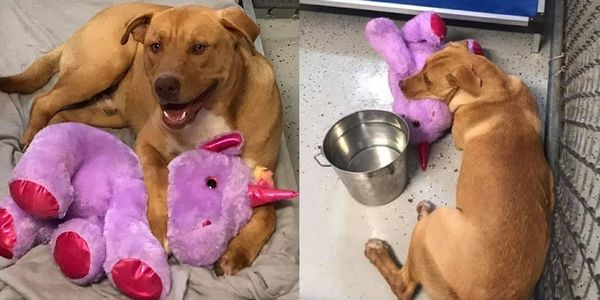 This stray dog fell in love with a stuffed unicorn toy. Make sure all shelter pets have the toys they need!

Sisu the stray dog was in love. He just knew it. As soon as he saw the stuffed purple unicorn toy with the pink horn and footpads in the window of a Dollar General store in North Carolina, he knew he had to be united with his beloved unicorn at all costs.

So time and time again, the stray wandered into the store — each time, trying unsuccessfully to steal the toy. In fact, it happened so frequently that eventually, staff had to call local animal control services. When an official arrived at the scene, though, her heart melted and she decided to finally buy the stuffed toy for Susi.

This sweet story gets even more precious — and Dollar General is getting great publicity out of it! Sign the petition to ask this giant collection of chain stores to donate toys to animal shelters.

The official was then required to take Sisu to an animal shelter, but she negotiated with shelter staff to ensure Sisu could keep his favorite stuffed buddy. The shelter began taking photos of Sisu hugging his unicorn friend and posting them online, and the story instantly went viral.

Now, Sisu has had an even happier update to his story. The 1-year-old pup was recently adopted by a loving family who has promised to make sure he can stay with his unicorn toy forever.

Sisu shouldn't be the only dog with a toy, though. Thousands of other dogs and cats are languishing, sad and alone, at animal shelters all across the United States.

Care2
This stray dog fell in love with a stuffed unicorn toy. Make sure all shelter pets have the toys they need!
CONDIVIDITWEET