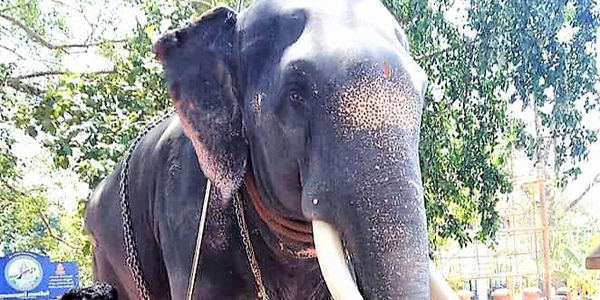 Demand justice for tortured and neglected captive elephants in Kerala

I saw Parthan the elephant's story on Sangita Iyer's Facebook page and was horrified. This poor elephant was forced to participate in the first parade of festival season at Thiruvilwamala Vilwadrinatha Temple near Thiruvilwamala in Thrissur and many parades after that despite its horrific injuries. He has been beaten and neglected so badly that all four of his legs, especially his two front legs, have swollen to horrific levels.

Still, he is forced to work even though each step for him is excruciating. In addition, he has not been given adequate veterinary care. He is supposedly being kept illegally by and SK group (Sabari) in Palakkad. Unfortunately, Partha's story is just one of many. So far this year, 24 captive Kerala elephants have been killed due to torture and neglect.

We will be sending this petition to the Chief Wildlife Warden (CWLW) of Kerala to take stricter actions against these illegal owners and enforce harsher punishments for their crimes. Punishments need to be severe enough to deter these people from torturing and neglecting their animals. These people should also not be allowed to collect insurance money for their animals dying. This is completely unacceptable and an abuse of the system.

These people do not care about the welfare of the elephant, they only care about money and exploiting the very creature your county supposedly holds in high regard. This is a disgrace to that belief. These poor elephants are some of the most tortured animals on the planet. This is not part of your religion. Torturing elephants and exploiting them for money is not part of your religion and has to end.

Please, ban all use of elephant exploitation in festivals and at temples. It in unnecessary and cruel. Punish the people who have brutally tortured these animals repeatedly for years, get these animals veterinary care, and put these elephants in a sanctuary where they can live out the rest of their lived free from chains and abuse. No creature deserves this type of treatment, especially one as intelligent, social, empathetic, and compassionate as the elephant.

From the day they are stolen from their mothers, these poor souls are beaten and put in chains so tight they cannot lay down or take a step. The chains cut into their sensitive flesh and cause wounds that are left untreated and become painful and infected. Elephants are forced to work sick, lame, and in blistering heat without food or water. If they falter, they are beaten, if they take one wrong step, they are beaten. Many of these animals are beaten and treated so poorly that they don't live to see their 30th birthdays. In the wild, they can live into their sixties and seventies. This has to end and you have the power to stop it. People across the world are sickened by Kerala's treatment of its elephants.

Please, CWLW of Kerala, take actions against these owners and save these beautiful creatures from more pain and misery before its too late and another beautiful elephant is found dead from abuse, torture, and complete lack of care.