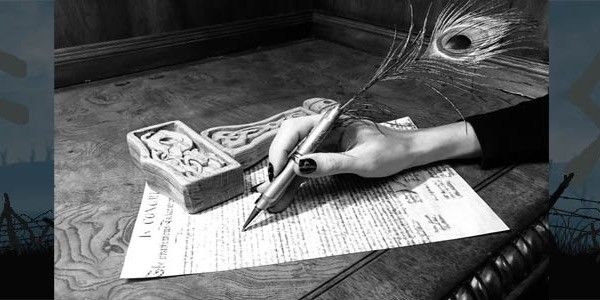 Our Religion is not your Trademark

Heathen artists and crafters all across America have lately found themselves the victims of unscrupulous business practices and been barred from selling their wares online. These outrageous incidents are the result of a trademark on the word “heathen” held by a David Lancaster who runs Heathen Productions aka Heathen Nation. Obviously, the US Patent and Trademark Office must have been unaware of the existence of thousands of American citizens who practice the heathen faith when they granted Mr. Lancaster his trademark on the name of our religion. We are seeking legal redress for these grievances.
The First Amendment guarantees all Americans the freedom of, from, and to express our religion. It is well established in American jurisprudence that the wearing or display of religious paraphernalia, including the kinds of shirts, wooden, and leather crafts that Mr. Lancaster is taking down from internet selling platforms. If you believe that your First Amendment rights to express your heathen faith are being infringed upon by Mr. Lancaster’s actions, then please sign this petition. Even better than a signature would also be your comments explaining how you use religious items or clothing as an expression of your First Amendment rights, or how you feel that Mr. Lancaster’s actions violate this most sacred of guarantees on our liberty and freedom.
The mission statement of Mr. Lancaster’s company, Heathen Productions, is “to corrupt America’s Youth.” This is in no way similar to the use of the term Heathen by pagan communities. Hedonism isn’t Heathenism, and the use of the term heathen by artists who are having items removed from sales platforms is in a very different context than that of Mr. Lancaster’s bogus trademark. Yet even if his trademark were valid, the style of the items themselves, the branding of Mr. Lancaster’s products, and the clearly religious context of the items being targeted by Mr. Lancaster’s unconstitutional assertions would not uphold Mr. Lancaster’s claims of trademark infringement in a court of law. So, please help us to right this wrong by signing this petition and adding a comment with your personal input on the matter.

Care2
Our Religion is not your Trademark
DELENTWEET