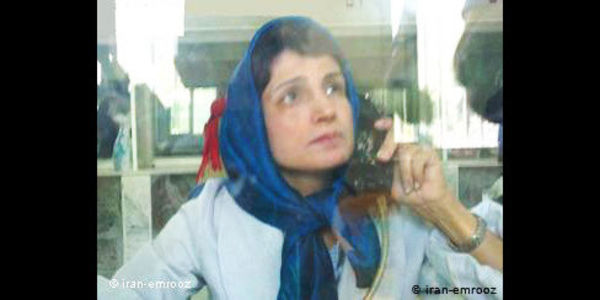 This human rights lawyer is a hero. But she is dying in confinement, unable to even see her family.

The most internationally famous human rights lawyer in Iran, Nasrin Sotoudeh, has been in prison for two years for defending feminist activists who challenged the country's mandatory headscarf law. But even worse, she's now been hospitalized and her family is worried for her safety.

Sign the petition to demand that Iranian authorities release Nasrin Sotoudeh and all political prisoners!

Authorities arrested Sotoudeh in 2018, concocting false charges of propaganda and collusion. She was ultimately sentenced to 148 lashes with a leather whip and 38 years in prison, of which she must serve 12 or more. By throwing Sotoudeh, a political prisoner, in jail, they have also ripped her away from her family, including her 20-year-old daughter, her young son, and her husband. Even worse, after her daughter Mehraveh Khandan went to visit Sotoudeh in prison, Khandan was briefly arrested and could still be put on trial in the future.

Once COVID-19 hit Iran, the situation escalated. The deadly virus spread quickly through the country's prisons, infecting incarcerated individuals without discrimination. To demonstrate their supposed commitment to "doing the right thing," Iranian officials agreed to temporarily release some prisoners during the pandemic. By the beginning of May, approximately 100,000 detainees had been removed from jails. But not political prisoners. The regime has kept hundreds of dissidents — people who dare to have their own minds and are not afraid to fight for what is right — locked in tight, filthy quarters without room to distance from other prisoners.

Sotoudeh refused to accept this dangerous situation. In the beginning of the COVID outbreak, Sotoudeh staged a hunger strike for six days to demand the release of specific political prisoners whose immune systems were compromised and whose lives were in danger.

Then, six months later, she staged her second hunger strike. This one lasted for six weeks — more than 40 days of not eating a single morsel of solid or liquid food. And slowly starving right now, when Sotoudeh's immune system needs all its strength to protect her from a fatal illness, is even more terrifying.

Then, on September 20, Sotoudeh entered the hospital — and we don't yet fully know her condition. The prison refused to tell her family about her hospitalization. Her husband and two children had no idea until a fellow prisoner informed them. When her family went to find her, they were shaken by what they saw. According to her husband, "We were [only] allowed to see her for a few moments. She was severely weakened, lost a lot of weight, and had sunken eyes"

At this point, Nasrin Sotoudeh is fighting for her life — while she fights for the lives of others. We cannot let the Iranian government win. They must not be allowed to get away with endangering political prisoners like Sotoudeh.

Care2
This human rights lawyer is a hero. But she is dying in confinement, unable to even see her family.
DELENTWEET