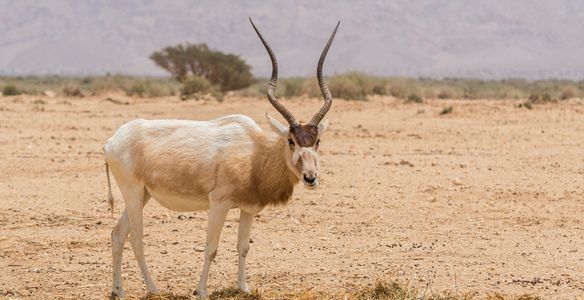 In 2012 the government of Niger created to Termit and Tin Touma National Nature Reserve. It is now the largest in the entire continent and serves as one of the last bastions of safety for some of the region's endangered wildlife. Two species in particular, the critically endangered addax and dama gazelle, are just one classification from being proclaimed "extinct in the wild" and call the area home.

But now, less than a decade after it's founding Nigerien officials may chop the 38,600 square mile reserve in half and hand it over to the Chinese Oil giant China National Petroleum Corporation (CNPC). The company has oil rights in a small section of the park and have pressured to Nigerien government to open even more of the reserve up so they could further exploit the region.

According to online environmental news outlet Monga Bay the most pressing danger is isn't the oil development itself but rather the Niger military units which poach endangered animals while in the park protecting CNPC. More oil development means more CNPC employees in the area which in turn will require more military units. They in turn will likely poach even more aggressively, spelling the end for the areas endangered species.

Even more worrying is the fact that the area officials hope to claw back from the reserve is the area in which most of the protected animals live. Any such a move could be disastrous.
CNCP's deal with the Niger government then, is up there with poaching as our one of the area's greatest threats.

Conservationists suggest that oil extraction doesn't have to be a death sentence for wildlife. They point to other projects in which oil companies worked with conservationists to actually improve biodiversity. What's more, ironically China is spearheading several biodiversity and environmental initiatives in the coming years. Yet, while championing the cause on the global state, they are helping to destroy biodiversity in Niger.

Niger is one of the world's poorest nations, and they have the right to earn income for its citizens by exploiting their natural resources. But there must be a way of doing it without threatening the existence of another species, especially one that are on the brink.