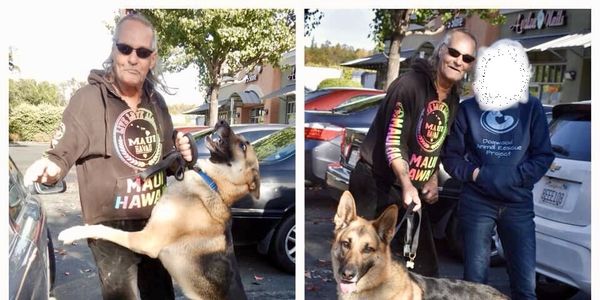 Justice for Sergeant the German Shepherd

UPDATE: Resident Bonita Elliott talked to an animal control officer and was advised on how to take further action: Please go to Theanimalshelter.org and file a report/write what you've witnessed. In the top right corner will be a place for a case # that number is #A18-100554. Feel free to email Animal Control Officer Justin Foster and Officer Diaz with your complaint also

Many Guerneville, CA locals have witnessed resident Jeremiah Dock abuse Sergeant the German Shepherd since he was a small puppy. Most recently, Guerneville resident Marlene Dorough witnessed Sergeant being beaten with a chain that Jeremiah Dock keeps wrapped around his body. She also saw him kick the dog in the stomach until the dog defecated on himself. Marlene called the sheriffs to intervene, but nothing was done.

Charles Brown, Guerneville resident since 2016, remembers when Jeremiah Dock broke Sergeant's leg at just a couple of months old. He recollects Sergeant wearing a splint after the incident.

Robin Trimmer remembers when the humane society actually took Sergeant away from Jeremiah Dock. Somehow Sergeant was placed back in Jeremiah's "care."

On the Guerneville Locals!!! Facebook group, many residents are discussing how nothing is being done to help Sergeant. Jeanne Jackson comments "Call animal control, he's done this for years." As Bonita Elliott shares "I've seen him abuse his dog also."

Stacey Skaggs writes "I have seen him kicking his dog down my street."

Naomi Huffstutter "This man is gross and hauls that dog by the Chain everywhere."

Kara Mcfarlane "I have seen him beating that poor dog. I have also seen him yelling at people on the streets."

Julia Conesa "I was in Starbucks earlier this week, when Jeremiah began beating Sarge once again. Hank called the Sheriff. They came into Safeway, took a report and left." And "He's lost his dog before because of abuse. They gave the dog back! I lived next door to him. I heard him beat the dog. I reported him and know one did anything!"

Kristie Sheets "I did. (Call the Sheriff) They drove over to the school and said they didn't see anything happening. This has been going on for years. Many people have witnessed it. Nothing is being done."

Locals say that Sergeant was in the care of Dogwood Animal Rescue whole Jeremiah had a hospital stay. Apparently they didn't know about the abuse, and gave the dog back to Jeremiah.

With so many witnesses, it's a shame that Sergeant hasn't been liberated from this toxic person and given a chance to rehabilitate with a patient and experienced dog lover. Please sign this petition along with your personal experience witnessing the abuse. We are asking Sonoma County Animal Conrol to free Sergeant from Jeremiah Dock.

Also everyone please have your phone cameras ready to film next time you see Sergeant being abused. The more evidence, the better.