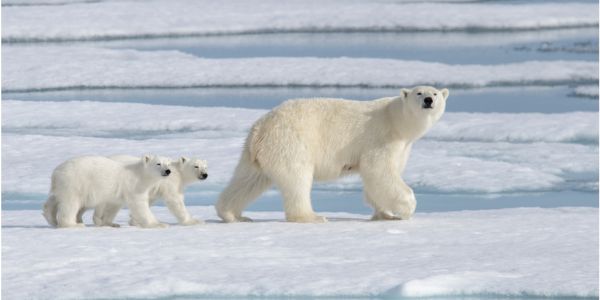 The first week of November is when hundreds of polar bears are doing a migration to their winter habitat. The non profit Polar Bears International (PBI) has deemed the week "Polar Bear Week" and this year, they're highlighting one major threat to polar bears: interaction with humans. Luckily, PBI and their partners are developing detection programs so that both polar bears and humans can coexist. The problem is, the project needs funding.

Will you sign the petition asking the Canadian government to help fund this critical effort? (You can also personally donate by going here.)

Polar bears are practically the mascot for the 6th mass extinction event we are currently living through. That's because without aggressive climate change mitigation, polar bears will be gone by the end of this century. As ice melts and the planet warms, these incredible animals become more and more at risk. That's why mitigating any and all negative human-polar bear interaction is so important!

There is one area where there is a really perfect opportunity to test out various new systems of detection. Churchill, Manitoba is a town in Canada that hundreds of polar bears pass by each year on their migration path. The people there have done great work to diminish risks by removing food sources that may attract bears, implementing a bear spotting hotline and more.

But there is still more to do! 3M is developing less invasive versions of bear tracking devices, for example. Historically male polar bears have been difficult to track because their heads are the same width as their necks and the tracking collars slip off. This effort and others are going to be critical if we really want to protect the majestic polar bear.

We can prevent human and bear interactions, thus protecting everyone. But the people on the forefront of this effort need funding. Please sign the petition if you think the Canadian government should be helping to fund these efforts!