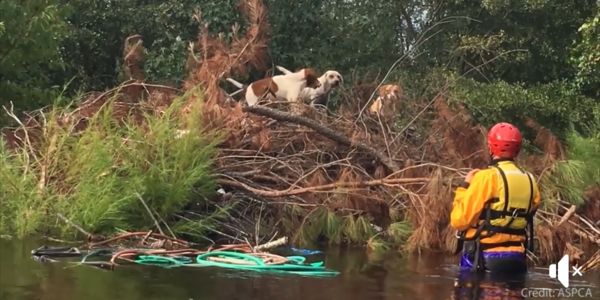 Do you remember all of the stranded animals that were left to drown each year during a hurricane or flooding ? From cats, to dogs, to pigs and farm animals. NOW is the time to prepare for evacuation shelters that are going to be pet friendly in horry county.

Let's urge officials & demand safe places for pets to be accepted at during hurricanes and floods.

The evacuation shelters that are offered in Horry County DO NOT take pets or animals. Most animal shelters usually have to evacuate all of their animals as well, and some take extra pets if they are able to house them

Owners seem to be forced with the only option as to leaving and abandoning their own pets, causing rescues and volunteers to go out risking their lives to save them. For many animals it's too late.  Many owners don't want to leave their pets,but they feel they have no other choice.

We need to urge The Red Cross and Horry County Officials/ Georgetown officials to realize thousands and thousands of animals are rescued each year during these storms by volunteers and rescues - and they are risking their own lives. Someone has to save these precious animals and they need to be accepted at some evacuation shelters! As many animals shelters try to assist in last minute animal drop offs, Horry county Animal Care center, The humane society's and other rescues start to become over crowded, and others have no where to go.

There MUST be animal friendly shelters in place ahead of time before another situation and crisis occurs again during an evacuation.

Animal shelters get full over capacity very quickly because of this, there are even dogs, cats, to farm animals or pigs roaming all over in the days before the storm hits when people have evacuated in a rush, and this pulls in even more workers and volunteers to help these animals all hours of the night and sometimes theyre having to relocate them to other areas if their shelters are in a flood zone or evacuation zone.

Information is not easily provided clearly on where to call to find a place to take your pet while you evacuate!

I personally have not seen information regarding what to do with your pets during evacuations and Many people resort to a evacuation shelter since they can not afford hotel stays for evacuating and usually animals arent allowed.

Number 1 - prepare evacuation shelters with pet friendly options and accept pets. For example, A room at each shelter/school can easily be set up for pets. A turf area can be prepared for these pets if unable to go outside during the storm. Multiple kiddie pools can be filled with sod or soil if they cannot be taken outdoors during the storm to use the bathroom. Cares an be stacked as they are in shelters making more room for each pet to come in.

Number 2- if owners leave their pets or farm animals abandoned, knowing they are in a flood zone and we're told to evacuate, they should be fined and charged with animal cruelty or a felony.  This does need to be a major crime or it will never stop. Preparing ahead of time and finding shelter for animals is a necessary step to saving them Instead of leaving them to roam, or most likely slowly drown and get washed away

Number 3- News stations, and government officials NEED to mention pet friendly shelters for each county in advance. This also needs to be found online easily as well. This will minimize owners from leaving any animals that can be brought to shelters. It is very hard to find this information.

Many pets and animals die and drown. They have no options to bring their pets to shelters and this needs to come to an END!

It is a shame that year after year people are still confused why their pets are not allowed when they have a mandatory evacuation due to Red Cross. But there are many areas in the evacuation shelters or schools they are using for pets to be accepted at.

Please urge officials to make changes for the next disaster and flood to include these innocent animals at evacuation shelters for free instead of people feeling like they need to be forced to leave them behind!! Speak up for your pets and animals. They need to be evacuated TOO